So, on my way out of Vegas yesterday, I had to pass by that Welcome To and See Ya Later sign right on the south end of the Strip.

Yeah, I've taken a pic there before, but it seemed right to do it again, as this was my final work trip to the town. Sure, I'll be back for fun, but clearly not as often.

I posted this pic on Facebook, just because I was leaving for home and it seemed like a good transition. 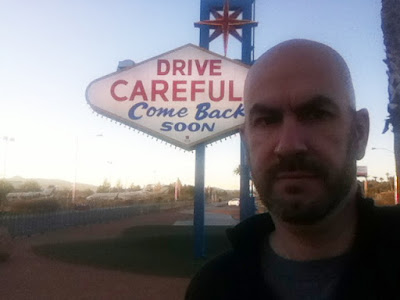 You've all said it - or some of you have - about my lack of smile.  Of course, I'm not that serious of a guy. Quite the opposite, actually. It is just my perception of how I think I look when I smile.

However, I did take another pic a minute later that I really had no use for since I was not coming to Las Vegas. 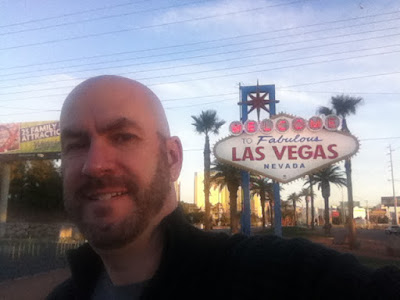 It doesn't show all my chompers or anything, but it's also not showing all of my "laugh lines" either.  I'm not mostly Asian in this either.

I thought about sending the pic to Sanj, but why give him the satisfaction of thinking I was smiling for him. I'm totally not.

Song by:  Semisonic
Posted by Blobby at 6:41 AM

Great smile. Why hide it?

Side note: this is the best I've seen your facial hair since I started reading you.

Your smile makes me smile.

It's a festively happy smile.

But I understand the self-perception issues.

I have never been to vegas; no desire to go; no interest in casinos.

You should smile more-- it's good for you.

Plus it minimizes the chances of looking like a rottweiller spotting a burglar....