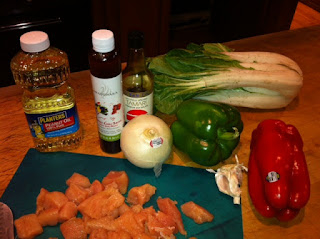 As promised in yesterday's post - Iz did more cooking for my man. It was just a bonus that it was Valentine's Day and I got some untold amount of husband points for doing it.

Of course, I have yet to figure out how to redeem these so-called points. They are seemingly good for nothing than bragging rights.

I can't cite Bloghungry, Bo or Mike or anyone else for this recipe -for the most part, I winged it.  Flying by the seat of my pants, as it were. While that is somewhat liberating, we only had a frozen pizza in freezer had it bombed.

I am happy to report - it not only didn't suck, but it was pretty frickin' good. I don't think 710 was being nice when he liked it also - he certainly ate it all.

Simple ingredients:  oil, soy (or I used tamari), sweet chili sauce, garlic, and the vegetables of your choice.  I used onion, green red and yellow peppers.  I tried the bok choy, but it looked a little past its due date, so I ended up not using the stuff.  Oh and chicken.  1.25 lbs of boneless, skinless chicken boobies.

Cube Chicken, place in bag along with 1/2 cup of marinade. Refrigerate for 30 minutes.
Set aside rest of sauce

On high heat, heat a tablespoon of peanut oil. Cook chicken for 2 minutes on each side (it will smoke because of the marinade).

Turn down heat, cover and cook for 8 more minutes.

I opted to cook vegetable in separate pan due to the amount of sauce with the chicken.  I didn't want it completely overwhelming the peppers and onions.

With another clove of minced garlic and a little oil, I sauteed the vegetables for 8 minutes or so.... 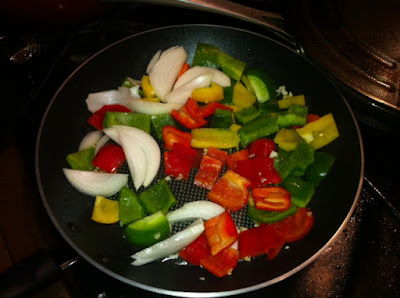 ....and then incorporated them into the pan of chicken. 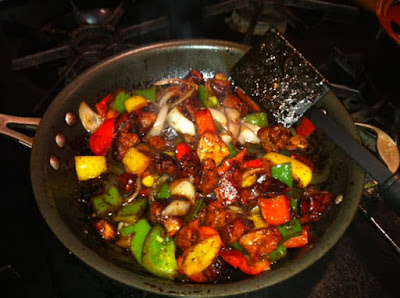 Add a little more of the left over sauce into the pan to heat through - and do it to taste. I only ended adding half of the sauce, as I didn't want it too gloppy.

The chicken was flavorful and nicely browned and the vegetables

The sweet chili sauce had a nice flavouring and it ended up giving a slow burn, but nothing so spicy that it'd be a turn off for anyone.

If not for the 30 minute marinating, the dish would take minutes to make.  Just do that first, so you can cut up your peppers and such in a somewhat leisurely fashion.

This also serves 4 (or so).  We have leftovers, so that's cool for lunch or another dinner later this week.

Song by:  Peter Gabriel
Posted by Blobby at 6:38 AM

This looks easy enough even for me. One good turn deserves another:

I learned a great way to make the best rice from our chef at work: saute raw rice in butter until toasted light brown, and boil in chicken or beef stock. YUM. It will remain flaky rice even in leftovers—no clods of sticky grains.