We are almost done with week two of our bathroom / dressing room renovation.  Week one and a half actually - as they didn't work at all on Tuesday and very little on Monday of this week

Still the room is gutted, the sub-floor is now in place.  Plumbing is in place too - at least the pipes and tubes. Electric is kind of done, but I don't think it is quite there yet.

We've already had two inspections - one for plumbing and one for the roughing-in process.

Yes, they roughed-in the walls yesterday and today.  See? 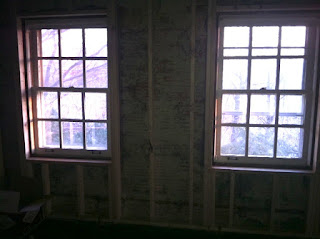 We had no actual walls, per se.  Plaster and lathe was right on the outer walls, so there was nowhere to put insulation, which only kind of explains why I am always cold. 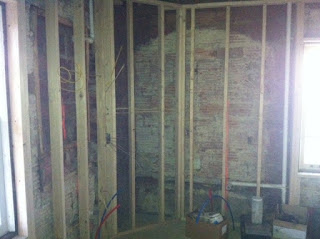 This is where the sinks will go. Mine is against the left wall.  710's will go to the window on the right. 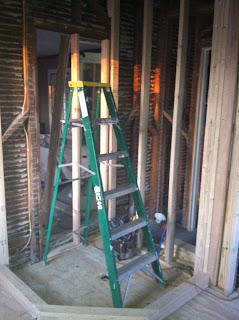 I swear the shower was supposed to be bigger than that. Well, it was, but with having to put in walls that weren't there to begin with, we lost some space. Oh well....whatta gonna do? 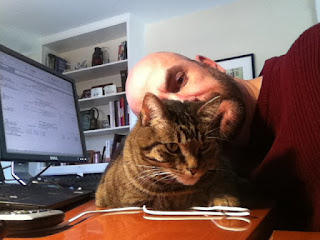 Sophie has been spending all her time with me in the office to avoid both the workers and the chance to escape. Some days she's good, some days not so much. Yesterday was the worst. She was off the wall.  This was calmest, even though she was in front of my keyboard so no work or typing could be done.  Totally worth it - and maybe a contender for yesterday's Site of the Month.

So tomorrow the electric inspection, then insulation will go in.  Monday there is another inspection and then walls and ceiling can go in.

I have a ladder just like that. Only mine's blue.