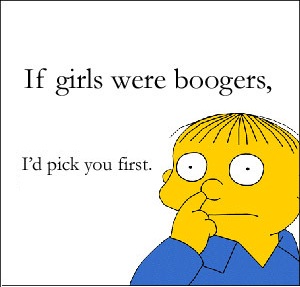 Girls wish they were boogers!

You know I'm not a big fan of this day of Valentine. Saint, though he might have been.

I make the effort, at least some years, to get 710 a card, but overall we leave the "holiday" alone.  No going out to dinner - and certainly trying for a place that will be over run with Valentine special,  couples and 'meals for 2'.

Truth be told  - it is not very reaffirming trying to buy a Valentine card for your husband. At least one that doesn't have a woman on it or that is shoved into the corner of traditional cards.

It's not that I want to go the route of those pseudo-porn / suggestive cards with the creepy gay-for-pay guys they get to pose on those "adult" cards, but there has to be a something in between.

With the state of Washington now allowing gay marriage (yayyy) and New Jersey taking steps to make it so, there has got to be a market for the same-sex couples out there.  It might not be the biggest market, but a niche one nonetheless.

The world is a-changin', all these ancillary services need to do the same thing.

But tonight there are no plans other than to hang with the man and the cat. Quiet, peaceful  - and maybe, just maybe, I'll have a new blog post tomorrow that revolves around cooking.   No promises.

Song by: Lucy Kaplansky
Posted by Blobby at 6:47 AM

Have a great day and a relaxing, romantic evening at home.
We're planning on going to some REALLY romantic restaurant and ruin the meals of all those couples without kids.
Kidding, we're most likely going to be at home, doing the same as you.
xoxo

I wish you a happy Valentine's , for you are a dear to me.