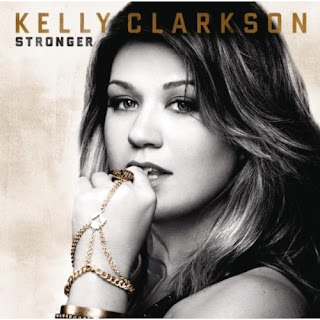 I am so far behind on my 'placeholder' posts, it's a little sad.  Or not. I guess it means I'm writing enough not to have as many placeholders. Or that I'm getting gypped out of two days this month because it's February.

You know I'm not a proud man or so much of a hipster that I only review / buy more independent music. I've said it before, my friend Josh thinks there is no such thing as 'bad music'.  He's wrong, of course, but I'm not a snob. A music one, that is.

I will readily admit to liking half of the last Kelly Clarkson disk, so I bought Stronger pretty much sound unheard. It's not an out of the park winner, but it is not a dud either. Sometimes mediocrity is worse than being bad. Mediocre can be just forgettable, which is not a good thing.

Clarkson is a decent vocalist and seems like an ok individual, but some of the writing and production just seems to replicate things she's already done and accomplished  - more of the same to build upon what has made her famous. But usually that practice collapses upon itself when people think you're one-note.

This, of course, is usually the way of the record label and / or management trying to preserve their almighty bottom line.

From a technical perspective, Clarkson seemingly has the ability to sing most styles of music (ok, not rap or speed metal) and succeed, if the song was good. But overall the songs are just kind of 'eh'.  At least with the last disk, there were good ones to run or ride too. Not as much here. And it all just sounds very similar.

That said, there are some decent songs - and yes, for riding or running.  Upon first listen, you might not think "Honestly"would work for a song to ride to - unless you think of a heavy resistance song you'd do a climb to. It's perfect for that.

I certainly don't mind the poppiness of "Einstein".  Yes, "dumb + dumb = you".  Not a bad song for a treadmill run. I can see this as a single. I can see radio airplay for something like this.

Her two first singles don't do much for me - "Mr. Know It All" or "What Doesn't Kill You (Stronger)".  Upon it's release, homo blogs made the latter the "new gay anthem'. When has that ever worked for us?  I've never been a fan of "I Am What I Am", "It's Raining Men", "I Will Survive" and the such.

Sure, I'll take Bronski Beat's "Smalltown Boy", but I don't have to live my life to Diana Ross' "I'm Coming Out".  Nor do I have to have Clarkson sing me Nietzsche.  I'm glad she's making a buck from it, but the song is not for me.

I hate seeing good talent go to waste and I think Clarkson has potential. She has more than shown it but overall on this disk, it gets squandered.

Maybe next time, Kelly.
Posted by Blobby at 7:27 AM