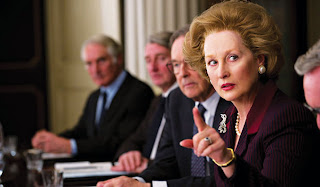 Yes, it might seem like an off-title for my movie review. And yes, I have many song titles with the word 'lady' in it.  Not so much with 'iron'.

O'Connor's song starts her song with the lines:  Margaret Thatcher on TV / Shocked by the deaths that took place in Beijing / It seems strange that she should be offended / The same orders are given by her.

(note to self - make it a My Music Monday selection.)

Yes, we went to see The Iron Lady this last weekend. I did not do it as a fan of Thatcher or her politics - as I am neither. I can't say I even went to see because that it was supposed to be a good movie - as with most reviews, which I couldn't seem to avoid, have been iffy at best.

The reason to go, is clearly Meryl Streep.  Even the iffy reviews, due to the uneven story, have been more than complimentary to Ms. Streep. Her movies are like pizza or sex - even when they are bad, she is still pretty good.

You do get the sense you're not watching her act, but watching Thatcher. Maybe not all the time, but much of it.

I like history, even recent history, and the story of Thatcher's rise could be enough. However, the style in which the filmmaker conveys this starts interesting and quickly becomes annoying and diminishes the actual telling. It is a distraction. And the story on the current Thatcher is all conjecture anyways. Streep does a good job with that, but there is a certain amount of fiction in there. And while The Queen demonstrated some interaction with the Prime Minister, you'll see none of that here. It was about Thatcher. Though there is a scene with Streep/Thatcher maybe CGI dancing with Reagan and then Desmond Tutu.  Creeeeeeeepy.

Is Streep worthy of an Oscar nomination? Absolutely. She is even worthy a win. It's just a shame that while she could carry the movie, being who she is, and playing the title character, that the rest of the movie doesn't hold up to that quality or help her along.

I like the movie as well; She captures very well a woman with some dementia and depression still trying to hold on. It was beautiful .

I like the music choice although it would be more of a tear jerker if Traci Chapman sang it.

Love this movie, Thanks for taking the time to post this.