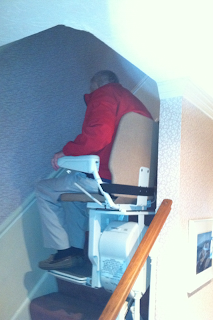 It has been a few hard weeks for the Blobby clan.

My father is 91+, and while still very mentally with it, physical limitations are more than creeping up on him.  It has been a struggle to watch him continue to drive and even walk at some points.

As anyone of this age, even getting up out of a chair can be a struggle.

Having pride isn't all it is cracked up to be.  I know I'm his son and have a bit of a stubborn streak as well, but honestly I hope I am not so set in my ways that I can't or won't accept help or suggestions when the time comes - whether it be with driving, hearing loss, cane usage, etc.

A week or so ago my dad stumbled down the stairs. The entire flight. No, he did not go to the doctor or anything (because he's stubborn and set in his ways) but banged up enough to at least not drive.  Don't get me started on the still driving thing.

Getting the car away from him has been tough - both with him and my mother. My mother likes to enable. She doesn't want the crucial conversation because, well, she has to live with him.

One of my sisters and I had a tough discussion with my parents last weekend and came to a few decisions, and not easy ones.

My brother-in-law had access to one of those stair escalator seats from his uncle. They gladly gave it to us, since it was no longer needed.  My father was very unhappy having it installed, but as you can see, he tried it out.  Now whether he will actually use it is anyone's guess.

The device certainly limits room on the already narrow staircase and if refuses to use it and falls, this time he'll clobber his head on metal. It won't be pretty.

My father said the kids, meaning the grand ones, can ride it anytime they'd like. My sister said they could ride it once. I say they can't ride it at all.  If they do it once, then they know how to use it and there is no stopping them.  ...and then they break it.

This is something I know from.

I am pretty sure I never had this conversation with my cousin David, but when I was maybe 8, I broke one like this in his grandparent's house. Hell, I didn't even tell this to my parents until this last weekend.  So not to take the heat for breaking it 40 years ago, I just walked away and pretended nothing happened.  I'm not proud.

As it turns out, yesterday was a big day for ripping the band-aid off.

If it all went through (I had not heard the final outcome), both of my parents got rid of their cars and got a new(er) one {singular car, that is} that my father can get in and out of more easily - but not drive.  And a company came over to assess their house and my father for part-time help.

My grandmother had help like this - and we were eternally grateful to Mrs. Price, especially her son. However when it is his turn, he doesn't see his own limitations. We only want someone to take him where he wants to go each morning and then get him settled.  The rest of his day is always at home anyways.  But to make it more palatable, I said we'd contractually have them change their name to "Mrs. Price".

I expect Blobby Sr. to rebel a little. I expect him to be depressed a little.  I expect him to hate us a little - at least for a while.  It's all understandable.  I do hope he sees it as help and not an impediment to his lifestyle. I hope when it becomes my turn, I have a different outlook.  It's easy to say that now, but.........

In this sense, you and I are living parallel lives. My 91-yr-old mother drove her car INTO the lobby of her favorite McDonald's. No one was at the counter or getting condiments, thank heaven. Did Mom finally realize she shouldn't be driving? No, she bought a new car.

Two weeks ago she was literally hours from death from an infection when my stepfather called 911 over her protests. She just came home from the hospital two days ago. They have daily in-home care for a few hours each day. I wonder how long it will be before Mom fires her. I admire a feisty sense of independence, but this is plain dangerous. I'm so much like my mom. Will I be this stubborn about my limitations? Will I remember this when I get old?

We did learn how to live from them. It's bound that we would share some things in common with them. It has to be scary though, watching yourself slowly become dependent on others. We spend so much of our time trying to be on our own, and then one day, your daughter has to move in to make sure you don't leave a pan on the stove or that you take your medications every day. Although it's frustrating for us to deal with, I can only imagine what it's like to lose independence.

Tough times and even tougher conversations but thank goodness he has family able to be there for him.

Your dad is more likely to rebel and get depressed and possibly hate you for the fact that he is now known as Blobby Sr. Have you told him THAT yet?

Oh Blobby. I'm very sorry to hear this. That is tough. Pride is a tough thing to swallow and i can imagine independent folks like your dad are going to continue fighting. Getting old is hard. It's hard to think about a time when i cannot climb a set of stairs by myself or jump in the car drive when i want.

My aging mother got a chair like this last year; I relate to all you are doing and feeling. It is a sadness watching our loved ones decline.

Yeah, I don't need to make it to 91 either. My folks are still so young (mid sixties) that I probably won't have to do this for decades. I secretly hope I go first.