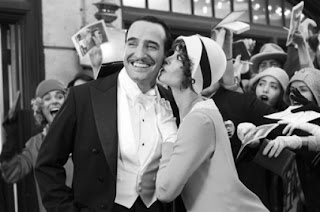 Three movies in less than two months! This might be new.

We finally saw the Artist.

It was one of those films I wanted to see and while arriving late in Cleveburgh, we got to a later start getting to it, due to others not being interested.  We went to the movies alone this time.

I truly enjoyed the movie on multiple levels. While the story wasn't too cumbersome and a little predictable - it was still enjoyable.

Still, the style, the cinematography, the lighting, music and dancing were done very well.  Old / classic, yet new.

For those who don't know, it is a silent movie. Not like Silent Movie, actually this is much better done. Very well done, actually. And it is in black & white.

I've now seen three of the five Oscar actor nominations, and it's safe to say that Jean Dujardin is the best of the bunch and deserves to win the award. He does more with a gesture or a look than the others seem to portray.

And anyways, Uggie, the dog, is as big of a star in the movie as Dujardin. 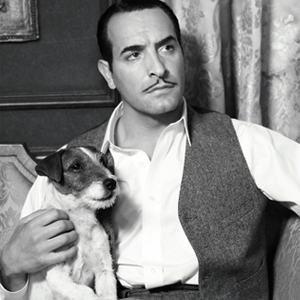 I do ty to avoid movies where the animals are in danger, shot, killed, tortured, have rabies or mange, etc. That is what people are for, not pooches.

I'd be lying if I didn't say Dujardin makes it hard not to have a little crush on him. He is fun to watch and quite handsome even with his little movie moustache. Actually, in non Artist life, he cleans up quite nicely. Quite! 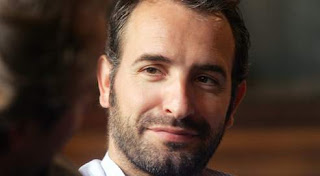 But for a non-speaking role (save one line), he clearly conveys the range of emotions the way the movies once had those limited means. I couldn't help sit there and think that this was the way my parents experienced moving pictures - and how they could see this movie and somewhat relive that experience.  I will suggest that to them later today.

There are a number of familiar faces in the movie - some more than others - including John Goodman (thinner, but not thin) and James Cromwell (hasn't he always played this role and this old - even back in Murder by Death?).  None utter a word.

Yes, there is a dance routine and Mr. Dujardain can do quite the hoofing of steps. Oh, yeah, there's some chick there too, but who was watching her?  Not me!

My parents, especially my mother, lives for this shit. Years ago, while everyone else was seeing Earthquake (in Sens-o-round),  I was dragged along to That's Entertainment.  {sigh}.  Is it any wonder I'm gay????   (if the embedded clip does not work in this post, you can view it here).

Still, for all it's hype, I was skeptical at a silent, black and white movie. I was not disappointed in the slightest.

Blobby says check it out.

Song by:  Delerium ft Sarah McLachlan
Posted by Blobby at 7:28 AM

I want to see this, the woody allen one, and Hugo. I guess I'll wait for Netflix or Redbox

So now that you've seen The Artist, are you changing any of your Oscar votes?

I enjoyed this movie, too. Then again, I'm a fan of silent films, but this was done so well. I even bought the score.