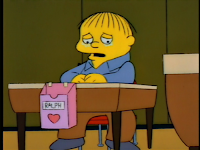 I know it is no longer Valentine's Day.  I'm as painfully aware of that as I was when it was the actual "holiday.

And I know I said I didn't care about VD, but sheesh, I went almost all day without getting one card.  Almost.

.....and it didn't come from 710. I felt like the sighing Ralph Wiggum who ended up getting one card in the I Love Lisa episode (which rates up there in the top 10 of all Simpson's episodes).

First a little background on this all.  ....and it does, somehow, come full circle.

Of course, there is the card Lisa gave Ralph 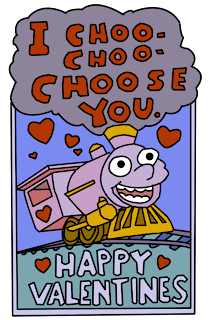 Or as Ralph would have said, "you choo--choo-choose me?"

I've used the image in a number of VD posts over the years.

Flash forward a few years, or a decade.  Out of the blue, I get a shirt from one Rebecca, that made me smile.  I put it right on and take a few snaps of it.  I post that pic too. 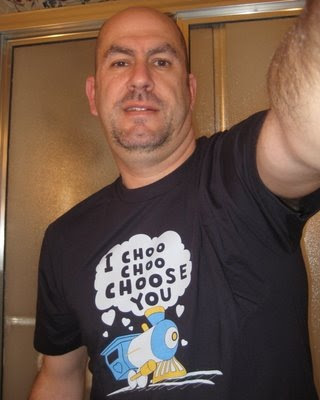 I seem to be a little heavier here, but you're supposed to be looking at the shirt, now the jowls.  Remember, we're going to continuity in this post, not multiple chins.

So, that was 2009?  Three years later, via text - since Valentines are now being delivered by text, yet we have no personal jet packs?? - I get my "card" from Becky. 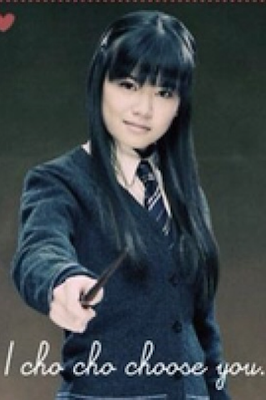 Ok, you might have to be a Harry Potter geek for this. Oh wait - that'd be me!

I hoped she had crafted the card herself, but apparently she snagged it off of Pinterest.  Becca just went to the site and said "accio Valentine card" and poof, there it was.

I don't understand the interest in pinterest.  Allegedly, the site has been around for a while, but clearly they have just snagged some PR person, since everyone in my FB friends keeps posting shit from there.  ...and these aren't even friends who know each other - or at least most of them.

I'm not going to that site on principle.  ....but they make a mean Valentine card, no?

I wish I got a valentine like that. Wonderfully geeky both.

I would be honored so to be your Valentine.