I had to use an 'onion' title, because I have no songs with 'sausage' or 'vegetables' in their title. Sad but true.

I attempted a new dish last night, courtesy of Mike. Perhaps his attention span is too short, or maybe mine is. I think my reading comprehension is on target, but something was off, that's for sure.

Mike's post on roasted sausages, bell peppers, potatoes and onions sounded great in theory. Basically a type of cassoulet. You can see all the ingredients in the title pic. 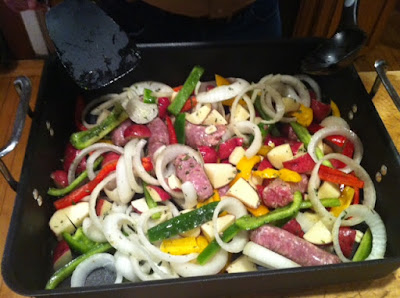 The prep is simple and it mixes up really nice.  It looks pretty.  And if Fernando taught us anything, it's that looking good is better than feeling good - or tasting good, apparently.

Mike did tell me that if it didn't turn out, I could blame Peter. Peter can consider himself blamed.

I followed the recipe to the letter. Well, until the last 20 minutes. But I could not cook this 20-30 minutes longer. 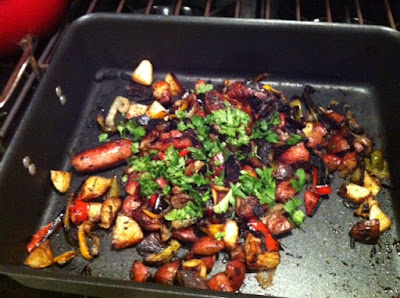 It cooked down to nothing and many of the veggies were charred. Black as the hills, I tellz ya.

I agree with Mike that there is no way this could serve six. You can see that when still in raw form, it looked like a heck of a lot of grub, but like cold water on a penis, you get shrinkage.

I truly believe the dish has potential, but the first time out of the gate blew - and it blew hard. It had some good flavour beneath the black (the orange juice and balsamic were genius, I must say!) , but I should have known at the first stir a half hour mark that it shouldn't have gone the full hour. I mean, I didn't even let it go the last 20-30 and it was finished. Had I, I'm not sure we could have served two - and even then, those whoever those two were, wouldn't have touched it.

It was my luck that we had a bunch of cookies, because that is what I ended up eating and getting full on.  So that was the silver lining.

Hahahahaha
Did you bake that in your kiln?

I would try two things: Lower temperature, and cook covered in foil the first hour. And maybe boost the temp when you uncover.

My most sincere apology for this outcome!

Generally, my nose tells me when something's done.

Guess I shouldn't be writing any cooks books anytime soon.

There's a song by INXS called "We are the Vegetables". (Which was actually the 2nd name of the band.) You should add that to your library so you can use it later.

And as for the cooking part, there's a reason I go through the drive-thru.

Wow...I'm amazed that it ended up like that. That looked like a LOT of food before cooking. Try and try again!!

Nice excuse to use the words black, penis and sausage in the same post.

Will you stop at nothing to drive traffic to your blog?

David I was about to say same - plus "blew hard"

We have a similar recipe we cook all the time because it is quick and easy and yummy yummy. We have found that in our oven, it OVERcooks in less than half time in one pan (charred like above) and undercooks a loooooong time in a different pan which requires lots more cooking time and attention. Weird.

Roasting was never my thing anyway.