I'm being lazy today when it comes to a post.  I admit I had nothing planned and was going to wing it, but then decided I would read the newspaper first, while I did laundry and had breakfast.  Yes, I was multi-tasking, but kept thinking, "you know, you need to blog still........"

The Cleveland Plain Dealer is a quick read. It is for me. I completed the entire thing while 710 is still on page one of the New York Times.  Granted, I do not read everything the PD has to offer, which isn't much, in my opinion. But you're not looking at it as the official record of anything.

I leave the comics until last in the chain of paper reading. In our horrid supply of comics (really - BC? Funky Winkerbean?  Beetle Bailey???) , I read just two on Sunday:  Garfield Dilbert and Doonesbury.

Since I was a kid Doonesbury has rarely disappointed. Garry Trudeau is usually spot on, and would be hard to argue with regardless of your political stance. Sure, I'm sure many of his targets do argue his perspective, but it makes the no less true.

So today's comic made me smile.  I'm guessing the same cannot be said for Newt. 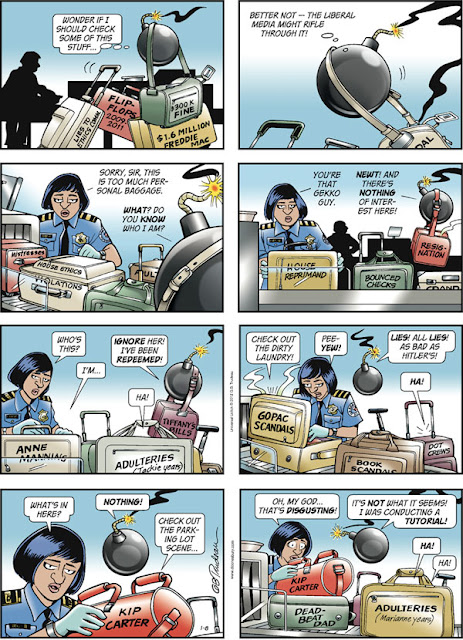 Song by: Mary Chapin Carpenter
Posted by Blobby at 8:45 AM

Email ThisBlogThis!Share to TwitterShare to FacebookShare to Pinterest
Labels: Comic

Doonesbury always makes me think of my father reading us the comics on Sunday morning before the Crescent-News had a Sunday edition. I never understood Doonesbury until I was in college. Then it became interesting.

Gary Trudeau has always struck me as one of those 'bad smell face' people that thinks they are better than just about everyone else.