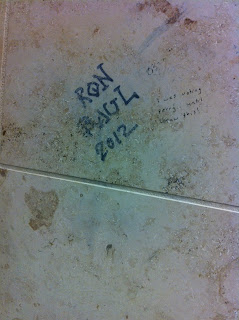 I'm pre-posting, so maybe by publishing time the crowd has gotten thinner.

The crowd, of course, being the GOP "candidates" for President.

Romney won, to no one's surprise.  Santorum came in 5th.  Not a real surprise. He wouldn't have come in that high had it not been for that fluke called "Iowa".

I think this was Perry's last call.  When the Occupiers are protesting against the 1%, I don't think they meant the percentage of votes he actually received.  Bye-Bye Rick.

A little more surprising is Newt.  He might not make it to South Carolina and if he does and finishes third or lower, it is bye-bye Newt and his automaton wife of his.  I mean the third one, of course.

I can't quite figure out how long Paul will last. But if his bathroom writing campaign manager has anything to do with it, he might stand a chance for a little longer. If you enlarge the picture, this ad already swayed a Perry vote - and you can see, it probably worked.

This nomination thing could all be wrapped up by the end of Super Tuesday or the following primary. With all the infighting, I don't see any of these non-nominees being able to be the VP candidate, or even any cabinet position. The rhetoric has gotten so bad, how can anyone offer or accept a position that they've talked so horribly about?

Regardless of how I think Obama has handled himself, he's really the only option. Now Trump just has to join as an Independent to break away enough of those truly fucked up Republican votes.

I am truly going to try to keep political blogging to a minimum this year.  There are more than enough guys and gals out there to do it for me.  I was just doing it to use the picture I took in the Nashville airport men's room.

Yes, someone will join as an independent and break away some Republican votes, but it won't be Trump. Look for Palin to enter the fray on the day before the GOP convention starts. I think this has been her strategy the whole time. In her mind she could win a three-way race with Obama and Romney.

There are plenty of folks who would vote for her, my father being one of them. Any time the topic comes up, he insists she's the best one and that he would absolutely vote for her. When I ask him why and press him for an answer, he responds, "Look at her!!!" Yup, my 85 year old father votes with his dick. And I don't think he's alone in that.