I'm in a quandary.  Or possibly just having an identity crisis.

Now and again, I Goooooogle the "Blobby" self of me, and a week or so ago I did not like what I saw.  Too many Blobbys - and too few of them me.

Out on the inter superhighway, there are a plethora of people using either my blog name directly, or ones too close for comfort.  Minus Ted Knight.

Sure it was flattering back in 2005 when Berke Breathed almost used my URL in his comic strip Opus.  (click image to enlarge and note the red circle in the last panel.) 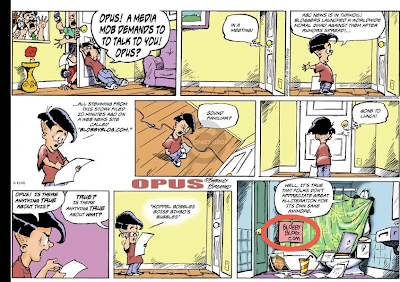 This publicity never garnered me the web traffic one might think. I don't think it garnered any web traffic.

But now flash forward almost seven years since that potential fame and now we have the masses using my name or coming perilously close. I will mention them, but I am hyperlinking none of them.

First off, there is a blobby's blog @ lumberjocks.com (no, I'm not kidding).

You can also find blobbyysblog (yes, two "y"s in the url, but the title has only one).

There is a blobbys-blog for soccer folks, which has not been updated since 2004. I'm a bit more troubled by this one as "his" posted email address is well, the same gmail address I have.  WTF?

Don't even get me started on the Mr. Blobby or worse, Mrs. Blobby, sites. And there are others. Quite a few others, in fact.

None of this makes me a happy man. Granted, one could make the argument I am not a happy man anyways, but that grumpiness is mostly for show.  I'm a pretty content guy.

Still - it has all got me thinking:   Do (or should) I up and change the name of my blog?

I have no desire or plan to change my style or content. Should I move forward with this notion then I have to think about all those times I refer to myself in the third person in my posts - that'd be problematic. I'm not about to go back and change all those. And of course,  I know a number of people link to me and probably a few more I don't know about. The logistics are painful.

Or I could keep "Blobby" as part of the new blog name and avoid some, but not all, of those speed bumps.  I even have a new title thought out - and I've done some investigating,  the URL is not taken.  No, I won't say it here so no one does take it.  And yes, I'd keep this URL so those interlopers won't get their grubby little hands on it - ever!  Yes, I'm bitter and vindictive. ....but content.

Maybe it's all nothing. Maybe I have my panties are all in a wad and I'm just in a mood that will pass.  We will see.

Rest assured...there is only one Blobby that matters (Although I am curious about Mr. Blobby at lumberjacks.com -- but out of respect, I shall not visit that site -- and if i do, i shall not tell you).

So unwad your panties and have a cup of decaf. And don't go changin' to try and please us. You never have to work that hard.

You mean this isn't the Blobby lumberjocks site!?

And all this time I thought...

Keep your title and don't worry about similar names. I think most blogs gain readers through commenting on other blogs, getting blog rolled and having a blog roll. Of course, keeping readers has everything to do with content and writing skills and lord knows you have plenty of that!

Lumberjocks.com was not as interesting as I thought it might be. I am sticking with this blobby blog.

I didn't know there were other Blobbies. I'm still trying to figure out what "Blobby" means anyway.