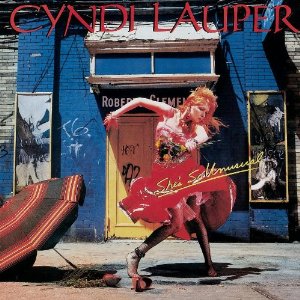 You know, I didn't do a Record of the Month - Classic last month. I'm not doing two to make up for it, but I guess I should crap one out here, no?

I might be running out of debuts, but I think it is ok to touch on Cyndi Lauper's first solo disk (not her debut with the group Blue Angel), She's So Unusual.

She had four top 10 hits that anyone over, say 30 knows:  "Girls Just Want to Have Fun", "She Bop", "Time after Time" and "All Through the Night".  It was an impressive disk in that regard.  And while those were clearly entertaining and somewhat overplayed - both on radio and MTV - there were two or three songs that for me, made the album - and they were both covers

First off would be the first track - a cover of the Brains' "Money Changes Everything".  Better than the original, in my opinion, it sets the tone for the disk.  More unexpected, and what I do consider the best track, is her take on Prince's "When You Were Mine".  This is pre-1999 Prince. We're talking Controversy Prince.

But there is some unexpected fun on the disk too: "Witness" and "I Kiss You".

Yeah, Lauper's voice at times became to cutesy-wootsey in places, but you could tell she had a strong set of pipes. At some point she tried to use that voice, but unfortunately, it was on her follow-up disk, True Colors.

Cyndi was never able to match her success with She's So Unusual.  I'm not sure she really tried though.  She certainly had one or two decent songs on True Colors (but not more than that) and a few on A Hat Full of Stars and A Night to Remember.  Not so much with Sisters of Avalon (where I stopped buying her) and anything after.

It's no longer 1983 and I can no longer listen to She's So Unusual straight through. It' has good songs, but I've outgrown the flow of the disk.  For me, it's strictly a song-by-song basis.....except for "Time After Time", which was so over done, I don't care if I ever hear again.
Posted by Blobby at 6:56 AM

I need to hear it again