So, lucky me, I was the subject of an email exchange yesterday between "our group".

Jon started it with: Does anyone else think this (illegal) Steve Jobs action figure looks a little too much like Blobby? 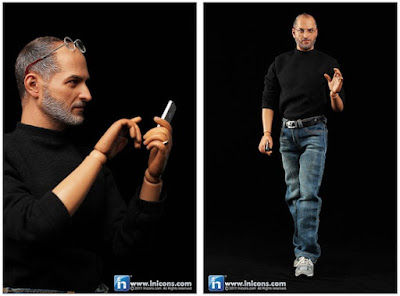 This is the (in)action figure.

Poor Mr. Jobs. Look at those arms and wrists, he must have been a Thalidomide baby. So, that's one difference have. That and about $7 billion dollars.

Morty's reply was: Skinny and holding an iPhone - duh!

It's true, I have my iPhone most everywhere I go, save the gym shower. And depending who is in there, I'd consider taking it.

Becky immediately chimed in with: Not nearly skinny enough.

And just to include Meredith in this, because she loves to be in the blog, she says: Good point.

Jon remained mum on my weight - the bastard!

For the record, I do wear my glasses, the readers anyway, a top my head the way the left Steveo is doing. I do own a black mock turtleneck and jeans, but I don't remember ever wearing them together. And if I did, I wouldn't wear white tennis shoes with them. I see that look and feel like doing Johnny's lines from Airplane. "Ohh...those shoes! And that dress!!!

I also don't pace and talk at the same time.

And yes, I might be thinner than I was, but no one is mistaking me for "skinny" - and I achieved it by not getting liver cancer! So there!

Yeah, Stevie J was a Buddhist, so there's a chance he might be reincarnated and come back to torture me for that last jab. I'll take my chances.


Song by: Suzanne Vega
Posted by Blobby at 6:34 AM

"That much grey"?? Careful there big boy. You'll be a member of my elite club before you know it.

Steve does have more hair....

You and I weigh the same. I recently met someone I hadn't seen in 20 years. He said, "You look exactly the same....except for all that gray hair."