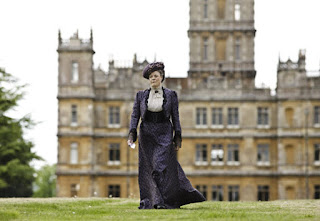 Oh yea!  Downton Abbey is back.  Season two, that is.

Finally good TV is back.  I say "finally"like I've been waiting more than a year for a new TV season.  In reality, we kept hearing about it and finally watched a mini-marathon of them during the holidays.  We had to wait a total of two weeks between when we watched the first season and the beginning of the next.

If you haven't watched, I highly recommend. The cast is great and the storyline is a very good one.  And while it is a good story, I do like Season 1 a bit more, at least to far.  World War I has broken out, as have the associated horrors.  The war also takes more of the story out of the manor.

But back to the cast - I can't say I ever saw Elizabeth McGovern when she seemed to be a second or third tier Brat Pack member, but she does well here as the only American in residence.

For those who haven't watched, the household has three daughters, which I read some tongue-in-cheek article calling them "the early 20th century Kardashians".

I love Lady Mary. The actress, whomever she is, does such a great job. I feel somewhat sad for Lady Edith, and clearly her parents do too. Their father, Lord Grantham is fun to watch.  But overall, it is the house staff where more of the drama lies.  Naturally, the nastiest of the bunch is the gay servant, now soldier. But it is the honorable Mr (not Master) Bates that is a great character.

...and really, how can you go wrong with Professor McGonagall Maggie Smith?  Parts of how she spars with her nemesis reminds me of when she was in A Room with a View (a great movie!)

Heck, we even enjoy Laura Linney just introducing the episodes.

If you have not caught the PBS series, I think you can stream it from amazon - but probably at a cost.  Since it is a British show, there aren't a ton of episodes. That's the way they work. So you don't have to endure six years of something like  Lost only to go - "eh".

Song by:  Petula Clark
Posted by Blobby at 6:23 AM

Facebook is abuzz with excited comments about this series. I did catch a few episodes recently of Season 1, but I no longer commit to regular viewings of anything. However, a new broadcast channel just started showing The Twilight Zone from the start. That's something I'd stay up to see.

I love it how a show on PBS has taken flight again. It reminds me of the olden days of Electric Company, Sesame Street, and Mr. Rogers Neighborhood.