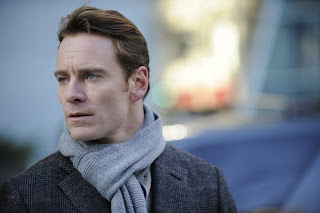 Finally!!!  22 days into 2012 and we have finally passed through the doors of a cinema for the first time this year.

Oddly, there are quite a few movies I'd like to see - or at least certain performances, if not the entire movie (Meryl Streep, for example).

With our friends Tom & Sal, we went to go see Shame. Their choice, I suppose. It was definitely on my list to see, but I gave them options - but really thought they'd choose the Artist instead.  I guess the promise of male full-frontal was just stronger than a silent black and white movie.  Sal was worried that it would be too artsy - no pun intended, he said.

Yes, it is has been a much hyped movie since October of November. It just got to Cleveland this last weekend.

....and "hyped" would be the operative word. Overhyped, in fact.

"S-L-O-W" and "boring" would be two more words to describe it as well.  So slow, that at one point 710 wondered if it would be rude to pull out Words with Friends and play a game or two. He wouldn't have missed anything had he done so.

I'm not a prude, but save Caligula, I am not sure I've seen an NC-17 movie in a theater. And back with Caligula, I don't think NC-17 technically existed. As Buddy Cole once said on Kids in the Hall, "I have enormous respect for filth".  So do I, just not iffy story telling

Yeah, there is sex, some of it graphic.  Yeah, there is full frontal of Mr. Fassbender and btw, mazel tov to him, but eh.  Yes, he's a sex addict, but I'm still bored. There's no story, or one so buried in supposition it could be almost anything - or nothing at all.

His sister, played by Michelle Williams Carey Mulligan, is equally messed up, as you can tell by only a few specific lines. A major part of her storyline is horribly predictable.

I can't say it's a spoiler, exactly, but their fucked up lives are, I'm guessing, due to a previous inappropriate relationship with each other.  It's never said, barely implied, but I can't imagine how else they became so distant - from others, each other and themselves - and damaged, without that being the reason behind it all. The probable relationship is the shame, for both of them.

I've seen Mulligan in a few things and while she shows a little more range here than she did in say, Drive, she was just ok.  Fassbender is seemingly up for best acting awards (we'll find out a little later this morning if the Academy Awards nominate him), but I was vastly unimpressed with most of his performance.

Having sex on camera might be operationally difficult, but is it "acting"?  Honestly, the most emotional thing Fassbender's character did was what I am guessing was an unedited elevator ride by himself - no dialogue.

Even with that, I don't see the performance award worthy - in nomination, let alone a win.

Yes, Shame has been the only movie I've seen this year, but as of now, it is the worst one I've seen. Personally, I cannot recommend it.

Song by:  the Eurythmics
Posted by Blobby at 6:05 AM

22 days? How about the whole of last year and I only saw one or two flicks. But after the Golden Globes, I've made a written list of several I'd like to see.

Movies. Wouldn't that be a great play for Words With Friends. As a sometimes blogger myself, Words With Friends seems a more appropriate time-waster than, say, television. Bottom line, my blog has more word game posts than thoughtful entries. Distracted by WWF and TV. I will always justify my TV time as long as I can tie it back to wordplay. Blame my love of Scrabble, WWF and TV trivia for me creating my blog and the anagrams I invent. Still, all these distractions keep me from blogging like you do.
Leona

Well you certainly zipped that review out in a hurry, and seem pretty cock-sure of yourself. Had you boned-up on any other films playing in Cleveland? If you're not so rigid, perhaps you could find another film that would be the total package for you.

Being a shrink I liked "The Most Dangerous Method"

Your Mike friend is enjoyably clever. I thought that was a pic of Ewan McGregor. Even after I read it was the other guy I thought you put the wrong pic up. But I can see it now.

(GROAN)... Just read Mike's comment - too funny. The guy looks gorgeous but I have no idea who he is or the movie you slammed. I'm so out of the loop when it comes to movies it is borderline embarrassing.

Have you seen Shortbus from John Cameron Mitchell? It's not rate because the MPAA or whoever hands out those ratings wanted it to be NC-17 because of the sex. It's actually quite a good movie. And artsy.