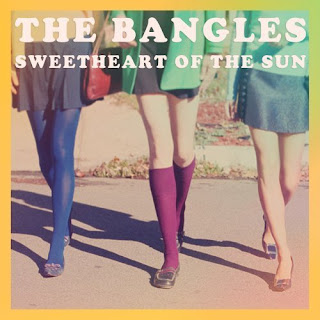 You can mock me all you want - I totally deserve it.

I have to learn to let go of the past.

When I was a child I thought as a child, yada yada yada.

But more importantly, I have a hard time giving up groups I either used to think were talented, or who were talented and became lame(r) as time went on.  The Bangles would fit into the latter category.

Yes, they had some pop crap that raised to the top of the airwaves in the last '80s, but if you skipped over that, you'd find some decent songs as they tried to play up to their  faux '60s vibe they tried to pass off.  It worked to a certain extent.  They have never surpassed their debut disk - kind of.  I'll get to that in a minute.

I can't say this is a full review of their last disk, Sweetheart of the Sun.  Why, you ask?

BECAUSE THE RECORD SUCKS SO BADLY, I CAN'T SIT THROUGH AN ENTIRE LISTENING.

Ok, maybe that is a little harsh, but it's not too far from the truth. I can sit through most of it, but probably not through every song, save one or two.  I keep hitting 'skip'.  Well, kept hitting.  I don't rotate through any of them anymore.

Hell, it came out in September 2011 and I haven't even been able to bring myself to review it.

25 years ago, their over the top attempts to be compared to the Beatles was cute, now it's just annoying. You're not untalented ladies, but you've carved yourself into such a niche you have little wiggle room. Having Matthew Sweet as a co-producer on this disk is not helping matters.  Didn't they see how his and Susanna Hoffs' Under the Covers vol 2 bombed??  ...and I mean totally bombed.   Undoubtedly, that was one of my worst purchases ever.....and I have a fuck of a lot of music.

Here is where the Bangles failed (in my opinion, of course):  they let bassist Michael Steele get away. She was the only songwriter/singer that dared to be different album to album or song to song.  And she always got the short end of the stick in terms of time on any disk.

Steele had no songs on their debut, so as time went on, it was her two (maybe three, if we were lucky) songs that I held out for. They never disappointed and you had to sit through a lot of filler to get to them.

Yes, the Bangles try very hard to get back to their debut sound, and in ways they do, but not with the same quality material, even if they are talented musicians.

As for the better songs, I could list them, I suppose, but then I'd have to go back and sample the disk to remember which ones they were by title - and you know, it's just not worth my time or effort to do that.
Posted by Blobby at 5:52 AM

I'm surprised. I DL'd (down loaded) the album because Kenneth in the 212 loved it. I can't say I love it but I do find it enjoyable.

It's hard not to think of the GoGo's when discussing the Bangles. I thought God Bless The GoGo's (bad title aside) was amazing and picked up where Beauty and the Beat ended.

One recent surprise was Lilly Allens's, "It's not me, It's you." I got it after seeing Chase's video for Fuck You. Too bad she hurt her career by doing so many drugs. I think she's clean now.