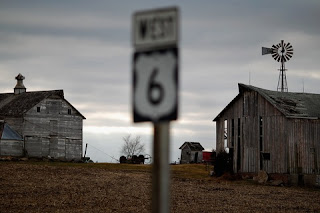 Today is the day. The official kick-off of the 2012 election season.

Of course, the unofficial kick-off was November 5, 2008 at least for the GOP.  And it seems there has been a GOP debate weekly for the last eight months.

I'm exhausted before it begins and quite frankly disgusted in the rhetoric that not only the Republican candidates are doing to tear each other down, I have yet to hear one of them discuss education, economy, healthcare or well.......much of anything.

Granted, I might read news organizations or websites that are skewed in their reporting, but I seemingly hear things regarding gay marriage, loading judicial appointees with ultra-right wing judges, repealing DADT, making sure DOMA goes nowhere.

Basically, we are back in 2004 when faced with no true answers or solutions, go to what they think the common folks fears may be - homos and immigrants. We're taking over, dontcha know. Ruining it for everyone!

Clearly, Iowans are considered or at least treated like 'common folk', but are they indicative of the country? I think not.  I don't get, except for being first, that much stock is held in their caucus. A lot of time, effort and money goes in to a state that holds no real weight in choosing either parties nominee.

Since 1972,  out of nine elections (I'm not counting 1996 since Clinton was sitting president and ran unopposed), Iowans only selected the nominee (not the even the presidential winner) 55.5% of the time.  Yes......I did the math.

For the GOP, they are lower, coming in with a 50% "success" rate.  This includes nine elections, three of them I'm not counting due to sitting presidents running unopposed (Reagan, Bush I and II).

With this record, these Hawkeyes may as well be TV meteorologists for all the accuracy they possess.  In theory, for the end pay-off, a candidate shouldn't even want to win Iowa.  The chances are as good as a coin toss.

Still it is one scary bunch of candidates. Not a winner - in any sense - amongst them. With all their sniping, I can't wait to see how they kiss and make-up when one asks another to be their VP.

I'm not thrilled with how Obama has turned out, but when you look at these buffoons, I'd be hard-pressed not to vote for him.  But with this group, it'd be hard not to vote for a doorstop before i cast my ballot their way.

I'd be lying if I said, "I can't wait to see how Iowa turns out", because for the most part it just doesn't matter.

Song by:  Dar Williams
Posted by Blobby at 6:31 AM

It's all they've talked about BFM all morning. There's nothing like hearing Mitt Romney and Santorum pronounced with a French accent. I finally gave up and switched over to VH1.