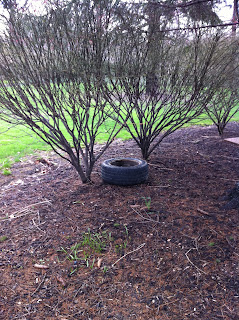 Long time readers of this here blog thingy will know of my tales of car wrecks that happen outside our house, and sometimes into our yard.

It is the curse of having a corner lot on a busy-ish street - one that is one way with a decent curve right near us.

The speed limit is clearly marked at 20mph, but it is also clear that most everyone doubles that "suggestion".   Bastards.

So on Friday night, we were sitting around eating the lovely salads I had created via Mike, via Martha.  I may or may not have heard a disruption in traffic, to which normally my ears are very attuned anymore.  And yes, I may have heard emergency vehicles, but that means nothing since we live near two major hospitals.  I should have picked up on the fact that the sirens stopped as they came near our house.  Not always an indicator, but it can be.

As we were thinking of bedtime, Denton was walking through the house and saw the emergency vehicles.  We wandered outside to see what was what.

What was, was this. 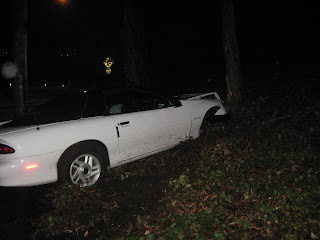 Another car in our yard.  Yes, the exact same trajectory that the one last year took. Maybe not as far up into the yard, but still........

The ivy had grown back, where the car last year had ripped out a landing strip - now we're back to square one.   .....not that I really care that much about ivy.  That's not the point.

The point is, the city hasn't done anything about the plethora of accidents that happen here.  I mean, sure they did when that one guy went over the cliff in his car and died.  So I guess someone has to die in our yard before the city does something.  Fair enough.

Last time, the folks were walking around and alright.  This time, there was no driver to be found when I went out.  The ambulance had already carted him off to the hospital that caters to the trauma level set.  That couldn't have been good.   He missed the telephone pole by an inch or so.  See? 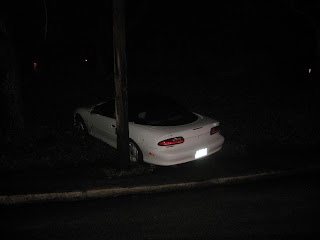 But the biggest shocker was yesterday morning when Denton went out for the paper and saw the car's tire sitting near our house.  80-90 feet past the crash site.  Or - up the hill, past 8-10 trees, across the yard before coming to it's resting place.  See the title image and this one here: 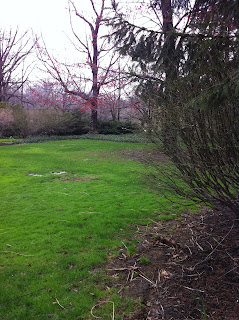 Yup, it traveled all that way across this yard and landed right at the bottom of this pic, which you now cannot see.   That's fucked up, right? 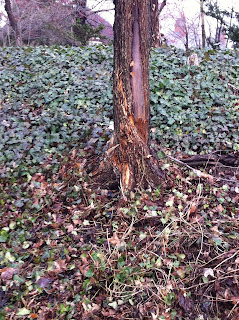 And of course, if this tree gets hit one more time, if the car doesn't take it down, we'll have to.  Which means, there is one less barrier between the accident scene(s) and the house.

So far, the only upshot is that I contacted (again), via email, some city guy about fixing this problem.  He has seen every picture I've taken of every accident on the property.  Oh yes, I'm documenting any of them I come across.

On a Saturday, he not only emailed back, but forwarded it up the management chain.  Here's hoping.  Here is hoping!

Song by:  Rosanne Cash
Posted by Blobby at 6:19 AM

Good idea documenting this phenomenon.
Do they manufacture attractive guardrails?

Yes they do. In fact it’s just in time for the launch of the new spring guardrail line.

They should at least let you keep the car, don't you think?

Was it just a tire, or a tire mounted on a wheel? Just curious. Either way it's kind of cool that what looks like a minor accident would knock the tire/wheel off the car.

Have you considered installing anti-personnel mines? Didn't I suggest that last time?

Instead of unsightly barriers, you might consider asking for speed tables in the road. More than a speed bump, they are flat-topped rises calculated to a specific speed: if you go the speed limit, your car will not bottom out on the table. They have an additional benefit of being snowplow-friendly.

Are those the bushes that extend out from the garage/driveway? Yikes!!!

They must know you are working from home!

how frustrating; I look for potential problems like this whenever I look at a potential house buy.

Very scary stuff, especially the runaway wheel. A homeowner near me had a similar problem. This being a beach tourist resort town people don't know the roads (or read signs) and this poor guy's yard, gardens and trees were brutalized almost monthly. Finally (the state did nothing) he had a landscaper and pile driver come in and fix the problem. It didn't cost much and the protection of his family is now secure.

Following 4 more accidents (one death) the state built strong, low borders just off the roadway, not on his property, which cannot be seen thanks to the landscaping. Hope you get this resolved quickly and safely.