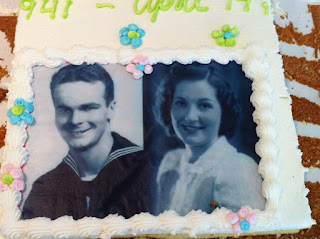 I have often "joked" about not getting out of this life early.   Damn!

This last Sunday we celebrated my uncle and aunt's 70th anniversary.  70!!!!

They had five kids, those kids had like 19 kids of their own and I have no idea how many great-grand kids exist.  Probably too many.

Like my father's side of my family, the 2nd cousins are much closer to my age.  Some of them are only one and three months younger than I am.  As with any family, some of them I like, some I barely know....and then everything else in between.  I know my 1st cousins on this side of the family, but again, they are a wee bit older (the oldest will turn 70 at the beginning of next year) and two of them are already deceased.

Denton and I had a nice time sitting and eating with two of my 2nd cousins and their wives. I like them, but never see them and never socialize outside of family functions.  We liked mingling with a few other ones too.

I will say I was a bit surprised for a milestone like this, that all (or at least more) of the grandkids didn't show.  Only eight attended.  To be fair, there is a faction that are probably incarcerated, so I suppose if they jumped parole, that might be their excuse. It's a colorful group all around.  It's great when the homo of the bunch (me) isn't the black sheep of the family.  I'm not even close.

My 90 year old uncle brought out some pictures of my mother's 70th birthday, which was 12 years ago (yes, I'll wait while you add it up).  Man, we were so young.   Or young looking.  Denton had dark hair.  He had hair!  I had more, but not a lot more.   Some of the elders looked so much younger, but oddly most of my sisters looked the exact same.  I'm not sure if that means they looked old then or haven't aged much since.

But it was nice to pass around the pictures and people kind of reminded that Denton and I were together that long ago.  Longer, but it's a good visual reminder.

Speaking of, as we were leaving I congratulated her again on her special day and she replied with what I perceived as this great comment; she said that she hoped I could celebrate an anniversary like this someday.

I'm assuming she meant with Denton, though I suppose she could have meant that I'd find myself a nice woman some day.  I don't think she did though - they have all been very welcoming of him.   They come up and hug him before ever acknowledging my presence.   Such is my life.


As for other long distance things - I wanted to mention that Morty ran the Boston Marathon yesterday.  It's like his 54th marathon or something.  I really have no idea how many he has done, just that I'm always impressed by what he does, and that he does it.

It was his second Boston run.  Actually he got a deferment from last year when he had foot surgery shortly before his scheduled run. Ruckiry (not Jon's boss), this is the last year for deferments.

Anyway,  Morty didn't win.  I mean, he's not from Hawaii Kenya.  I think he did more than respectable, but his success depends on him and it is for no one else to say.  I'm in awe of his marathon, triathlon and IronMan abilities.

I thought about it today and I was so new to blogging eight years or so ago, that I had a dozen entries on his first race where I tracked him through his course.  No such entries today, though I did check in a few times at his splits to see how he was doing.

I love seeing folks who go the distance, be it family or friends.


Song by:  Buckingham/Nicks
Posted by Blobby at 6:36 AM

I loved your Kenya reference. In fact I'm going to write a joke from it. Hope you don't mind.

there is a faction that are probably incarcerated

That observation had me howling!

As my family's genealogist, the surprises one gets along the way can be quite enlightening.

I'm afraid I hold the record for marriage among all of my not-so-big family: 32 years married, 39 years together. Sometimes it has been more indicative of stubbornness than bliss, but we're still together and better than ever.

These days, the only way I'll run is toward a hot tub.

Be careful! Based on their longevity, it appears that you are fishing in the deep part of the gene pool.

My cousin just ran the Boston M too.