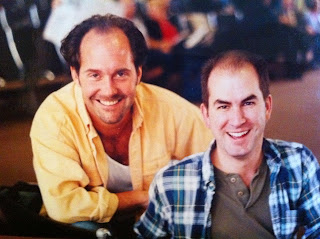 I think this was taken around 1994.  Does that sound right?  Anyone?  Anyone?

I had a layover in Los Angeles and my friend York (yes, his real name) met me in between flights.  What a guy.

Who actually comes out to LAX for an hour to catch-up in person??   York did.  Clearly this was when one could still come to the gate of the plane.  It seems the terrorists have won.

I had met York four years earlier in New Orleans. A three-city tour trip with Morty - Dallas (underwear party at a bar?), Houston (ohh....toooooo many nasty stories to even get into here  I still cringe thinking of some of them) and then New Orleans (mainly to give Becky a break from us crashing with her in Houston).  I feel that I've told that story before in this here blog-thingy, so I won't rehash.  Well, I know I haven't told those specific stories (though they are great!), just the one on meeting York.  Anyway, we've been friends ever since.  21 years - isn't that amazing?

We rarely see each other, as he lives in southern California, and well.....I don't.  And I don't get out there much and he sees no use to ever come to Ohio, even to see me.  Hmphf!

We do not talk nearly enough.  I "chat" with his husband in Facebook,  but York, for the most part, shuns that social media.  Still, we do have fun when we talk - like yesterday.  We had kept missing each other for weeks and finally connected.

I'd like to say we talked about things that were really interesting and groundbreaking, but sometimes it's just the everyday boring stuff that connects us and keeps us connected.  We talked about taxes, marriage and a weight loss.  ooooh.

But I now have a client an hour south of York.  I'm thrilled to be able to go out and then stay with him and his better-half.   And who knows, maybe I'll get to see them every couple of months, instead of every couple of years.

Song by: Madonna
Posted by Blobby at 6:33 AM

That can't be you—that guy's smiling. :)

Whenever I travel these days, I check to see which online friends are nearby. Not enough, I'm sorry to say. But I'm happy to say I know how much fun it is to see you, even for only a brief time.

Some of my best friendships are those that I've known for 20+ years and that I don't get to see often enough... regardless, one phone call and you catch up quickly with your friend for life.

I don't know what year the photo was taken, but I remember that shirt

You both look like Balki from Perfect Strangers. Yet another 80's reference for you.

I have a good friend that lives IN the twin cities, and I NEVER see him.

But we have the best time when we do get together.

You're still quite a looker.

You were a hot young lad!