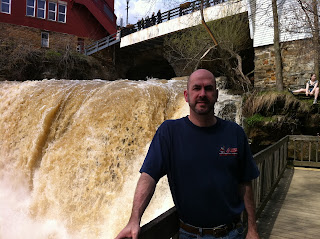 I grew up in a small 'burb known for it's beauty and peacefulness.  Everything thinks, 'oh, how great it must have been to be raised there'.

Of course, these people are 40+ years old when then say that.  When you're 13 or 18, you're just kind of bored to shit at a place like this and want to escape.

I'm sure all the trouble I got into as a child was an outlet for my boredom.

Yes, the center of the town is a waterfall.  Well, actually there are three, but two are man made.  The one behind me is natural.

My parents still live there and we were in town to get my sister's dogs and had lunch with my mother.  Since there had been a hell of a lot of rain the week before, I knew the falls would be going strong.  Often, they are not and it's safe to say I've never seen them at this strength before.

If you look above my head in that image pic, we used to be able to crawl up where those trees are and sit up at the edge of the falls without danger.  Any number of people dove off the falls - that was never my thing. I'd sit and climb down.

You can see the water is moving way too fast to sit up there this last weekend, not that two stupid girls didn't do just that.  Live and learn.

The river was completely swollen, but not at flood stage.  The built in dams help, but considering I've seen this river and falls for 40 years or so, it says something when I've never seen it this full or this fast.

I used the iPhone to shoot a few videos and instead of uploading to YouTube, I'm trying to embed right into the blog from the phone.  I'm not sure how it will work.


Song by: Michelle Shocked
Posted by Blobby at 5:59 AM

Email ThisBlogThis!Share to TwitterShare to FacebookShare to Pinterest
Labels: Growing Up

Do you realize that there is a girl with her legs spread in the background of this pic and you are standing up all fuddy duddy? You could have like taken off your shirt or something and WOWED us. But no, we are left seeing that GIRL in the background. Thanks.

Thanks!
All I can think of is popcorn now!

came thru fine! is that the FLW house "fallingwater"?

water is a VERY powerful element; I have stood in the caves under horseshoe falls canada, and the pressure and the vibrations are incredible. imagine how the japanese people must have felt seeing that wall of water coming towards them at a high rate of speed...(shudders)