I don't think this is turning into a cooking blog anymore than it really is a music blog.  It's just a Blobby blog.

But here I am, blogger man,  off on another cooking adventure. Doo-doo-doo-dooooo. ("he'll be back!" - that line is for Becca and Sal)

I was over at Mike's Short Attention Span Theater and saw he had a recipe from Martha Stewart.

I didn't go all goo-goo about the recipe because it was from Martha. Truth be told, I've never turned a page of her magazine or any of her books.  I didn't really have much respect for her until her prison stint, then I figured she was all bad-ass. Still, I've never paid attention to any of her 152 shows and certainly had not made any of her food.  Until now.

Mike made her new spinach salad sound so good, I had wanted to try it.   Yes, 'new' is italicized because apparently she has an old, outdated, tired recipe.  I know this because as I was trying out the new one, Denton looked something up on-line and it was a very different one he was reading vs the one I was making.  I started getting confused, not that it is all that difficult to throw me off my A game.

Anyhoo......the salad sounded good and a little different so I figured, what the heck.

It actually was really good, and unlike Mike, I took pictures.

I have never cooked with chorizo before and I don't think I exactly purchased the right stuff.  It was ok, and it would have been better had I done it correctly.  Still, potatoes, sausage, uncooked baby spinach and egg on the surface sounds iffy - unless it's an omelet - but it really was good, and hearty.

Salad for dinner?  This works.   Filling, but not making you too full.  And the dressing couldn't have been easier. 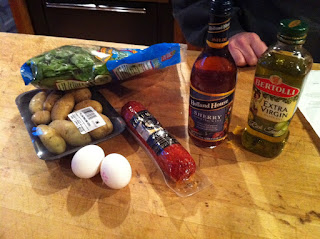 The ingredients, minus the shallots. I used them, I just forgot to photograph them. 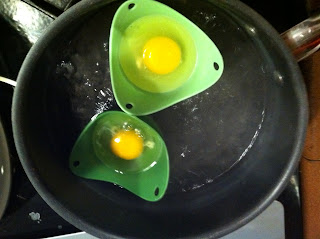 This isn't the way that Martha says to poach your eggs, but these little bitty titty cups are perfect for doing it.  So, why should we mess with a good thing, even if the eggs don't come out so free form for atop the salad.

I took pics of the potatoes and chorizo cooking, but I didn't post them.  It bored me. I didn't have time to take pics of making the warm dressing. 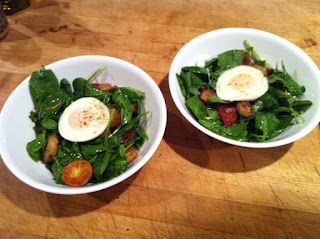 But here is the finished product.

Like Mike, I'd highly recommend making it.  Except for the oil, everything is pretty good for you (and a little olive oil ain't killing anyone) - and salad with a little bit of protein?  C'mon, it's the best of all worlds.

It's Martha, so she seems to like us to dirty a lot of dishes and utensils along the way.  For salad you want it to come together more quickly, but it doesn't.  Still it's a good selection to put into dinner rotation.  It's a keeper.

Ok, I have those same egg poaching things. Every time I use them, I have a hell of a time getting the egg out. So I just go back to the normal Martha method.

What did you do to get the eggs out of the little bitty titty cups?

It looks delish... except for the egg. Blarf!

wcs - we rub a little vegetable oil (or the likes) inside before putting the egg in them. They come out just fine.

I wonder whether the chorizo issue was whether it was Spanish chorizo or Mexican chorizo? I understand that there is a difference. In my neck of the woods, I'm probably only going to see Mexican chorizo.

Sure have big feet for a cameraman, Billy!

Hey! I'm honored you tried the recipe! And REALLY glad you liked the dinner. It's one of my new "favorites".