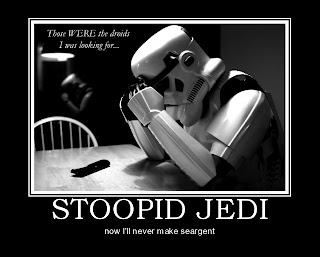 It's a little early to be doing Site of the Month, but I'm on the road for the next two days and I'm a little stressed about work stuff that I can't really focus on a good blog topic.

It's no secret that I'm a bit of a Star Wars geek.  You can probably scratch through the Star Wars part.  You probably already have.

So this month you are getting a website and video.  Videos.

Yeah, it has nothing to do with not being circumcised - so some of you can calm down right now.

Now, amateur video-maker-guys reshoot, scene by scene, Episode IV: A New Hope.  Since each scene is done by a different video-maker-guy, there is no uniformity to the actors, costumes or props. Or medium.

Oh and by 'scene', I should clarify:  except for the opening credits, each part is 15 seconds long.  So the actors/costumes/props and medium can and usually does change every 15 seconds.

You don't have to love Star Wars to enjoy it, but it certainly does help.  Oh - and you also need some time blocked out to watch it too.

Allegedly there is talks to do Episode V: The Empire Strikes Back, but it has not been put into "production" yet.

Actually, David provided me what I thought to be my April SotM, but I'm now saving it for a May/Mother's Day version.
Posted by Blobby at 6:42 AM

Once you start watching it, it's soooo hard to quit.

I can totally see you as Chewbacca.

I saw the original Star Wars in 1977....does that count? Because that was the last time I saw anything related to it.....I'm such a shameful American. Now, if it DID have something to do with being uncircumcised.....perhaps.

I like the lego men. Thanks for sharing your geekness.