No Future in the Past 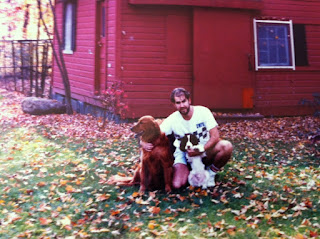 D@vid, over at Another Mile Marker, was wondering about a favourite picture bloggers had of themselves.

He didn't really say it had to be an older picture, but it seemed implied.

Stating I have a favourite picture of myself is like saying one clown is less scary than the other.

I'm not thrilled with how I look, or how I smile, etc.  I get that many of you will come to my defense and say nice things, and that's great, but it doesn't really change my perception of me.  It's like hearing yourself on an answering machine.

Sure, I was a precious 3 year old, but I'm not sure that's what D@vid was going for.

D@vid alluded to 'Yum' or 'Yummy'.  Yeah, that's never gonna happen.  I don't even use the word(s).  I might do the Froderick Frunkenshein follow-up of 'oh yes, it is quite good', but never the Igor 'you just made a yummy sound."   And yummy is not an adjective to describe me anyway - especially by me. {shudder}

I settled on this picture.  Look at all that hair, would you?  Back in 1990-1991 (that is as best as I can guess when the pic was taken).  But you can see the beginning of the end, with the start of what could have been a very nasty comb-over.....right in the front.

Brett might notice I'm not so pasty white, and it seems I might have always had decent legs.

I am there with my then two favourite boys:  Chase and Reggie.  One of my sisters has always had two dogs and I love(d) them so.  Chase (the golden) would let you pet him until your arm fell off.  He was so well trained.  Reggie (the spaniel) was a little more high-strung, but he was a good good boy.  Not to trash their memory, I still adore Petey (their beagle) the most.

I do love that Reggie and Chase had a two story dog house with a 25' run attached.  Yes, believe it or not, that is not my sister's house, but the dog one.  Spoiled rotten, they were.  Mostly by me.  I'd take them down the hill and into the river.

It is hard to believe they've been gone for 8-10 years.  It's hard to believe my hair went bye-bye about 4 years after this picture was taken.  Well, 4-5, if anyone knows exactly when it was taken....or by who. I'll assume my sister, or Denton.

Song by: Vince Gill
Posted by Blobby at 6:20 AM

A great pic and beautiful legs!

That is a great shot. WIsh I knew you back then.

I enjoyed the memory and the photograph too.

Yummy is in the eye of the beholder... we are often our worst critics, stuck with body issues ingrained in us from childhood that we can't shake. We carry then with us throughout life, regardless of how others see something different. All we hear are the voices in our head and see the things that we wish we could change.

I appreciate your photo contribution :) (And you do have great legs)

I like this photo because it reminds me of myself, especially when I was younger and had two dogs.

Look! You had a tan. :) Nice legs boo. I would have done you in the back of the woods.