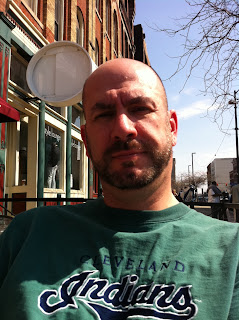 What can I say?  It's been a decent few days.

Yes, it is easy to bitch and moan in blog-form.  I won't lie and say I've got life on a string, but the weekend was nice.

It is April.......in Cleveland........and Sunday it was 82 frickin' degrees.  1 degree off from the all time record.  Yeah, we could have done yard work or all the other stuff on the honey-do list, but we went downtown, sat outside and had a late lunch.

I have tons of work travel in the next three weeks.  Denton is gonna be lonely - so am I.  But at least he'll have Sophie.  I will have FaceTime so I can see Denton and Sophie.

I am trying out a few new recipes this week.  Well, actually, I did two of them last night.  One for dinner last night and one for tomorrow or the next day.  The second one took about 20 minutes prep and two and one half hours to cook.  No way I could pull it off after working all day.

I know you want to know what I made, but I figure I can get two frickin' blog posts out of this little chore.  I can say that dinner last night turned out incredibly well.   I've got a good meal for guests.  I'm so psyched by that.

But of course, my big win so far of the week:   the Indians are in first place.

I know - none of you care.  Or few of you.  But you know, last year they started in last place and ended in last place.  With no exaggeration, I think I can count on one hand how many times they were not in last place last season.

We don't have a lot of chances to say we're number one.  I'm actually thrilled I can open the sports section again.  Honestly, I normally only read it during baseball season, but last year there was no good reason to do it without major depression setting in.

Don't get me wrong, I hope we hold on to our standing or at least don't plummet to the bottom of the rankings, but I'm a life long Cleveland fan - I know the odds and out trends.  Still I'm hopeful.

And the last bit of good new is Indians and baseball related:  former loser tribe member, Manny Ramirez, has retired before having to take a 100 game suspension and probably getting his ass canned due to steroid use and abuse.

So many people were enamoured of Manny when he played for Cleveland, but I knew he was a lazy SOB.  Yeah, he could hit, but I never saw anyone be so slow when "hustling" to catch a ball.   He never tried.  I saw it time and again in Boston and Los Angeles, but I figured it was now their problem.

The bastard will now not get into the Hall of Fame, which suits me fine.

I do have a trip coming up at the end of this week that might have a slight surprise blog entry to it - but you'll all have to wait and see.

We'll always have 1997. Don't ever forget. For the rest of our lives we'll always be able to say that about the Tribe. Pathetic, I know.

Adios Manny. Remember in his early days when he'd be standing out in the outfield daydreaming the time away, and the batter would hit the ball right to him and he'd just stand there as the ball landed with a big "thump!" on the ground next to him? Yep, that's just "Manny being Manny".

Surprise entry? Are you coming to see me? :D

Someimtes you need just to take a day off and relax. It is only human. Remember all work and no play makes Jack dull. There are days I do nothing,Then there are days I work my arse off.. So you had a day off to enjoy. I say good for you.
Hope you have safe travels.

Oh, I care....deeply, I do...honestly. But not about the Indians. About you sitting outside downtown having lunch on a warm day. That's what.

"leave your state of mind, these are the good times"

well well well, the tribe and the phillies BOTH occupy first place right now in their respective leagues. and, like you, I only read the sports section during baseball season.

let's see where our teams are on 10/1 (we don't play you this year in inter-league games).

have a good week!