It Was a Very Good Beer 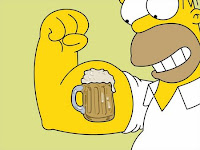 One of my co-workers had her last day on the job. She was actually let go. I feel bad for her, but I never quite knew what she did, as she never seemed to be in the office. And unlike my job, hers did not normally require travel.

So I guess I'm saying, I'm not sure if the firing was justified or not.

The problem with goings-away like these is the person of honour is bitter bitter bitter. You want to empathize with them, but don't want it to be the only topic of conversation. It was.

Ruckiry (not Jon's boss), my man-date, Scott, was there, so we had a good time. There was also the office lesbian. None of us at the office have much of a filter and we all get along fairly well, so it wasn't long before conversation took many a bad, but funny turn.

And I should know this after years of the drink: eat.

Sure I only had four beers, but they were 22 oz ones. Eating two chicken wings and one onion ring is hardly dinner. Nor does that absorb any liquor.

No worries, the plan was for me to work from home on Friday, and I did. While I had a restless night of sleep (or lack thereof), I wasn't hungover at all in the morning.

Sad in a way. It used to be that four beers was what I used to have before going out for the night. Now it is my might. .....and then some.

Song by: Homer Simpson
Posted by Blobby at 7:08 AM

Fuck-- FOUR beers?? I would have been knackered after two.

Not to freak you out or anything, but who is a manager more likely to lay off? The person he sees everyday and knows a little about and whom he has some interest in, or the person who works at home a lot and whom people don't know? It seems clear to me that telecommuters are more likely to get the axe.

I don't suppose it would hurt you to spend a little time now and again doing some self-promotion.

As for beer, I'm with CB. One beer I'm tipsy; two I'm drunk; three I'm an asshole. Yeah, they used to call me milktoast in college.

these days, one glass of wine does me in; I get very sleepy. I used to drink muuuuuuch more than that in college...

PS - sorry the tribe is not doing well so far. but the season just started...

I've grown up too; no fun in this.
But you are not really truly grown up until you start talking about your bowels in public.

I remember when I was in my twenties... and it would take 8 or 9 vodka cranberry drinks to get me slightly buzzed... and we did this every night. Now, a half a drink and I'm doing a strip-tease on the bar