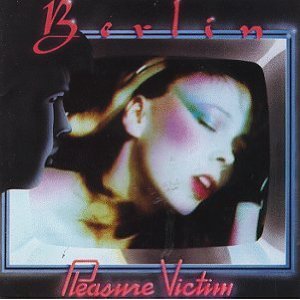 
Ahhhh....I remember driving in 1983 and hearing this come across the car radio.

Unfortunately,  I was with my 15 year old sister at the time, and one of her friends.  Still I went out and bought Pleasure Victim, what is essentially a seven song EP. ....and not really a bad song among them.

Ironically, or not, the song that made me aware of the group, is also my least favourite and least played.  Thanks to MTV, most people really know Berlin from their song (or their video), "The Metro".

Terri Nunn is in good voice and and the band is more than adequate for drum machines, synths and an occasional real guitar and bass.

Pleasure Victim was a good debut and their next year's release, Love Life, was fine, but I never thought it matched the EP.    .....and of course, once they got to "Take My Breath Away", from Giorgio Moroder and the Top Gun soundtrack, I was out.  I was done.  The affair was over.

The debut disk, is still fun to listen too.  I can see myself on Indiana Avenue in my shitty apartment with no heat and huge drafts, but I played great music - even if I say so myself.
Posted by Blobby at 6:13 AM

I remember this song! It was used as a 'demo' when I bought my first real stereo system. What big speakers we had in those days.

I loved this album and her hair style. I saw them in the 80's right after missing persons. SOme memories.