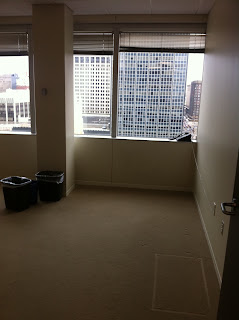 So yesterday was the final day in the office.   My things had slowly been brought home, my stash of dark chocolates have been gone for weeks - and left unreplenished.  I like Dove Dark a lot, but no need to keep keeping them around.

Yesterday I brought home my chair and docking station and that was all she wrote.  That was the last of the crap.

As it turns out, besides the move, it was an ultra busy day.  I stopped counting at 258 (!!!!) emails.  Ultra frustrating too.  One client was just off the wall insane.  Former client now.  I think the 'former' part is all for the best.  I'm not losing sleep over it.

I love that everyone else who hasn't been gone for days all left by 16:00.  I was the last one out the door 2.5 hours later.  I didn't even look around.  I grabbed my shit and let the door hit me in the ass on the way out.

I didn't get too emotional about it. I do plan on seeing these folks even if we don't share space.  Lunch every two weeks.  Everyone takes a turn planning it.  I don't have to worry about mine until the last part of July.

There is a week before I start working from home.  I'm right back on the road, so I'll have to come to terms with it later.

Oh and a week or so ago, we had our last chip contest.  Poor Marty - I love the man, but for a bit I think he snapped. I came back from a trip to find this: Chipapalooza 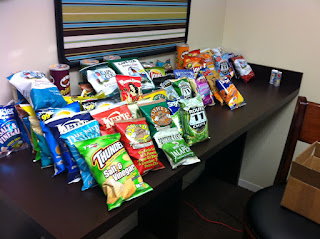 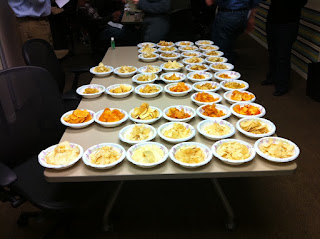 Regular. BBQ. Salt and Vinegar.  Salt and Pepper.  Sour Cream and Onion.  Sour Cream and Cheddar Cheese.  Jalapeno.  Hot BBQ.  Dill Pickle.  Crab (yes, crab!).   I'm sure there were other flavors.  There had to be at least two brands for each flavour to be included.  It was all very scientific and well coordinated....as you can see.

You try one of each chip, mark your ballot (oh yes, there were spreadsheets) to determine which of each flavour was best and then your overall best pick.

I didn't eat one of each. It's not that I'm against eating 78 chips at one sitting,  ohhhh no.  I just skipped anything Pringles related.  I skipped anything with vinegar.  And yes, the Jalapeno were hot.  And oddly, the hot BBQ were much hotter.

I actually was one of five who picked the winner.  It was a brand called Dirty and the flavour was Salt and Pepper.   But the thought of eating 50-60 chips, or even parts of them was a bit much and a bit disgusting.

Still, it was a great thing that Marty did to engage everyone in the office knowing it was one of the last times we'd all be together.   I'm going to miss not hanging with him on those days that neither of us were on the road.

The title pic is my office right before I left.  I didn't take my desk. I didn't need it or want it.  Someone else bought it and on the last day, I actually used Marty's office since he had moved out two days earlier.

Well, second week of May, I'll start over in a new office - a home one.  I guess I should set that up, huh?

It's a bit sad, isn't it, this transition? Best of luck with your new home office!

Ahh...the return to Cottage industry and sweatshops. Is your employer going to provide a utility subsidy? Seems that they are interested in saving overhead and shifting some of the actual costs to you.

I am so resisting emails at work. Docs generally don't have them; I imagine I would have this many in a morning!
"Nasty chips" as we call them are my nemesis. I am not supposed to have them at all.
Sour/onion are my favorites.

I would love to work from home all the time rather than oncet or twicet a month. But it does take discipline, I suppose.

So, is that the final decision...working from home in the future? I wish you all the best. Weird and wild not having to go downtown any longer. A new path...new journey...!