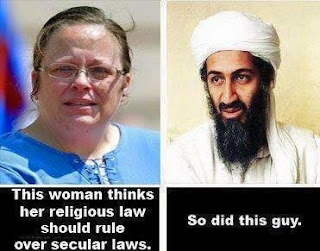 You know, I've kind of left this twat of a woman alone in this here blog.

Everyone else has been doing such an outstanding job at point out her political, religious and fashion flaws, that I haven't really felt the need to weigh-in.

I almost don't feel the need to point out her marriages, but I just did.

I do feel the need to point out her getting preggers by her third husband, while she was still married to her first.

Yes, that's right. Married to the first, but got inseminated with twins by the man who would eventually be her third husband, even though the second one adopted those aforementioned twins.

If Kentucky is trying to be the poster child for Poor White Trash, they are giving Alabama a run for their money.  But as Cher said in Clueless in regards to being a 16 year old bride - "as if !!!  this is California, not Kentucky!"

Now did anyone actually think this woman (do I even need to say her name?) was going to comply with the local, state or federal rulings against her? I love she wasted time appealing to SCOTUS when she (well, her hate group handlers) so vehemently said, even before the appeal, that SCOTUS was a joke and not to be taken seriously.

Mind you, she'd be fine with SCOTUS if rulings went her way.

And through this all there are two things I don't get.

Well.....I don't get many things, but that's a different topic for a different day, isn't it?

One
I get she can't be fired. She's elected. But where is the state or voters in recalling her? KY does understand that with the federal rulings they are losing are costing them money, not this woman, not even her department (or county probably). And now that some of the same-sex couples (and opposite sex couples) and the ACLU are suing her, and the department, well, they're already adding on to the $2.3M costs KY has to pay for fighting the original SCOTUS case.

So where are big guns, the party leaders, the state leaders, to either force her out with discussions, or to get a recall motion going?

Maybe I'm wrong here, but is there zero support for same-sex marriage in her county? Is no one stepping up to the plate because they're all like her?  I mean, she dresses like a sister-wife, so maybe they're all related. It is Kentucky. (see: twins, first, second and third marriage.)


Two
No marriages at all in the county.

Here is what I don't get - and could be the central part of any opposing case against this cunt. Yes, there. I said it. She's a cunt.

She is denying all marriages, because she opposes the same-sex ruling. So she's treating everyone equally. Isn't that she's actually fighting against?

If her religious convictions are so strong, she should support "traditional" marriage as strongly as she opposes same-sex marriage. So in turn, she should be granting licenses to one man-one woman.

Her not doing this shows this isn't a religious issue at all. Call it a hate issue. Call it a political issue. But it's not religious.

Her argument isn't valid. Personally, I think she opens herself up to more lawsuits from straight couples than the four same sex couples who probably live in that county.

And I hope she does.

As soon as she's out of there - and it's just a matter of time - though her 15 minutes of fame has long since expired - I expect to see a gofundme campaign set up for her, where she'll end up with more money than the Beverly Hillbillies.

bitch is as bad as the baker, the florist, the pizza parlor. she cannot open a gofundme account, since she is subject to a lawsuit by the ACLU and who knows who else.

and her asshole "lawyer" is telling her it's ok to break the law for jeebus. the "lawyer" needs to be disbarred; does that bastard even HAVE a law degree?

I wanna see the judge put the royal smackdown on her and her office co-workers tomorrow!

Sometimes I am actually pleased I live in the UK.
Jean-Paul
itsmyhusbandandme.wordpress.com

She is a pretty sad individual. I've avoided commenting over at JMG. It seems that no one and no law can tell her what she is going to do, and she will twist her bible and her god into what fits her definition of morality, then force her definition of morality on her own public ... or maybe just maybe she "accidentally" stumbled on a way to temporary fame and a big fat go fund me page? Money talks. I see a spade and I'm calling it.

She will be making plenty as the new lovechild of the Right, going from fundraiser to lecture hall. I wonder if she planned it all.