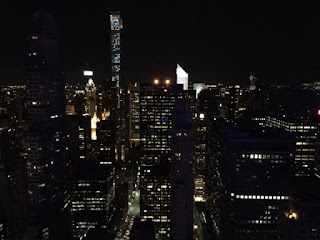 Due to circumstances beyond our control, we went away last weekend, through Wednesday.

I say it was beyond our control, because we planned to go away a while a go and work issues just got in the way. When they finally cleared up, we literally planned a trip within four hours - including boarding Petey, hotels, etc.

Clearly, flying was out of the question. We don't have Trump kind of money, or a private jet. But on the plus side, we don't have multiple ex-wives, have daughters we want to date or believe that vaccines give children Autism.

On a slightly earlier version of this attempt, I did reach out to Tornwordo, as he is a newly licensed travel agent. His attempts were valiant, but ultimately all for naught, as 710 and I couldn't even solidify a departure date.

As it turned out, we just used the internets late Friday night and again the next morning. And we were off Saturday afternoon.

Our destination: NYC.   Possibly our favourite place. In certain ways, save the hotel and perhaps an event ticket or two, you don't need much planning. There are plenty of things to do in Manhattan.

We took the same hotel we did last time, though we got bumped up a few floors - well, 44 floors higher than before, to be specific.

The hotel "claims" to have "park views", but if they existed at all, the 18th floor doesn't show them. Or maybe you could see a blade of grass. 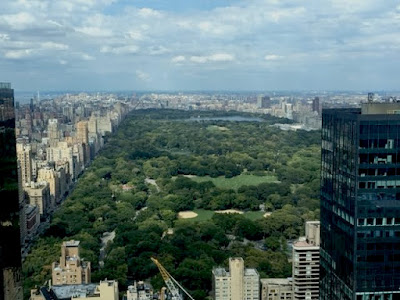 Now, that is a park view.

Immediately, I was wondering how I could live with a husband, dog and cat in 300 square feet. And to be more specific, where would we put the cat box.

The hotel room had a microwave, coffee maker, slow cooker (swear to Yahweh) and a dishwasher. I could almost live-live there. And of course, to wake up to those views.

As we were 62 stories up, with floor to ceiling windows, we were too high for me to effectively dance in front of the glass, or spy on people. No building was close enough that had anything but daytime occupants. 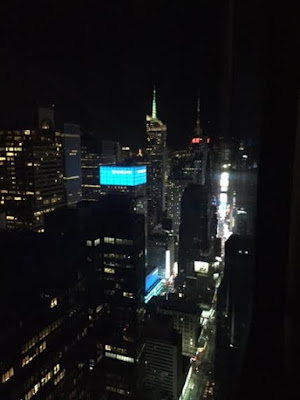 Look one way and it's Time's Square. 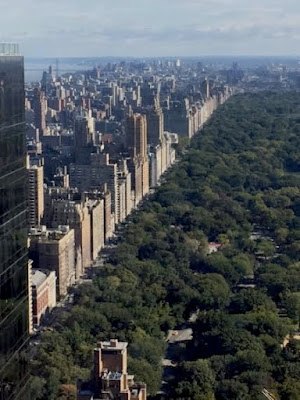 The other way is Central Park and the Upper West Side.

Though you can't see it in the picture, you get the George Washington Bridge.

Straight ahead was the east side. 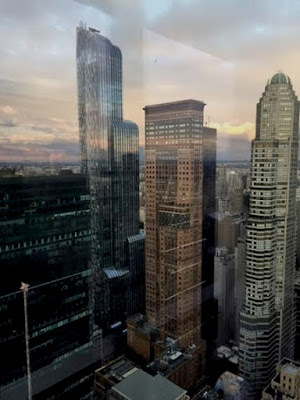 The tall building with the curved top is One57. Currently it is the tallest residential building on the island, that can be occupied. It is also been the 'big ticket item' for real estate deals in the NYT almost every single week for the last 15 months.

If you look in the title image you'll see a taller residential building in progress over on Park Avenue. It will almost equal the height of 1 World Trade. Actually, if you take away 1WTC's antenna, this new one is taller.

And if you look at the park image, don't get too attached to the view. There are currently TWO residential buildings going up there, that will almost totally block said view.  It's a crime.

I'm glad we took this opportunity and even paid way more than we should have for one of the nights, because we won't be getting a view like that again.

NYC is a great getaway, even at the last minute. And those views? I'm dyin' ovah heah.

I'm waiting for some enterprising architect to build a residential building that will SPAN the park, like the St. Louis Arch...

You're right - NYC is easy to do on short notice if you're not picky. Glad you guys had fun!