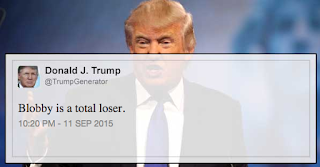 Of course, if he were describing you, it would be: Loser. Disaster. and....well.....probably Loser.

He doesn't haven't a huge vocabulary for his put downs, not that he doesn't put down folks all the time.

Let's face it - Trump is Scut Farkas from a Christmas Story.  A big talker until someone really takes him on. And then you see he's just a shell of a man.

Really - all you do is type in their name, choose 1 of 5 or so backgrounds and well.......then it gets a little tricky. You can send it to your Twitter account or link it to your Facebook account.

OR - you can do what I did, and just do a screen capture of it and I posted it where I want without linking the site to anything. Because if FB has taught me anything, that people are assholes when it comes to politics and taking a joke.

The Trump Generator will come up with its own derogatory tweet about the person you typed into the placeholder. Though to be honest - it might A tweet. I'm not sure it generates much more than "....is a total loser".

I could be wrong.

Sure, it's low-brow, but it's Blobby's Blog. This ain't Shakespeare. It's not even Christopher Marlowe. It's Blobby!
Posted by Blobby at 12:02 AM

Not Shakespeare? At least I can understand Blobby.
Jean-Paul
itsmyhusbandandme.wordpress.com

I can not stand him; I can't even look at his face anymore.