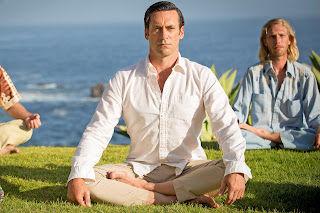 It seems Mike and I (or any of you) didn't play the Emmy Guessing Game™ last year.

He probably was in a hissy fit back then and not talking to me or something. But now that a potential bounty of cookies are involved, he's all about the inclusion. So away we go.

Well, away we kind of go.

Where with the Oscars, they might be an educated guess, this is a full blown-out blindfolded pin the the tail on the donkey thing.

TV has changed - not that that is a bad thing. But it turns out, I'm not a good binge watcher. So many shows are now geared towards that method. I'm not a Game of Thrones fans (oh - some poor guys reading this just passed out!) and we just got Netflix, so.......since I don't binge, I haven't seen all of the shows here. Or many.

Crap that I watch won't get nominated.  Sorry House Hunters Off the Grid!  Sorry reruns of Law & Order: Criminal Intent!

So yeah. It's a guess. But I don't think Mike (or any of you who'd like to play along) are gonna do any better.


(as it turns out, the Creative Arts Emmys were given last week, so anything in blue is a given for both any participant. They already won. We are really only counting the things in red.)

Because it's time. And the other nominees aren't that great.

I could got with Poehler (though not her best year in Parks and Rec). Louis-Dreyfus just nails it.

Guest actress in a drama series
Margo Martindale, "The Americans" Diana Rigg, "Game of Thrones" Rachel Brosnahan, "House of Cards" Cicely Tyson, "How to Get Away With Murder"

Because I believe it's for the final series and the phone calls were just great.

Wish Anna Chlumsky would get it. It'll probably go to Modern Family, but Nash is underrated and great in Getting On.

I love Joan Cusak, but never saw it. Though shouldn't Tina Fey have one this just for the Marcia Clark make-up and hair?

The show is so well done. I hope they get something.

Song by: Matthew Penn
Posted by Blobby at 12:04 AM

Ok, here’s what sucks….I just added all my picks to the comment window. And since i’ve been such a bad blogger that i can’t even remember my user name and password, i had to use “anonymous” sign-in. And something in cyberspace fouled up, cuz all my content disappeared. boo-hoo.
So here are my picks — short and sweet. They are very different than yours…this could be interesting!!!

Actor in a drama
Jon Hamm

Actress in a comedy
Julie Louis-Dreyfus

Actor in a comedy
Jeffrey Tambor

Actress in a limited series or movie
Jessica Lange

Actor in a limited series or movie
Timothy Hutton

Supporting actor in a limited series or a movie
Bill Murray

Supporting actress in a limited series or a movie
Kathy Bates

Writing for a limited series, movie or a dramatic special
John Ridley

Directing for a limited series, movie or a dramatic special
Ryan Murphy

Writing for a variety series
The Daily Show With Jon Stewart

Directing for a variety series
Amy Schumer and Ryan McFaul