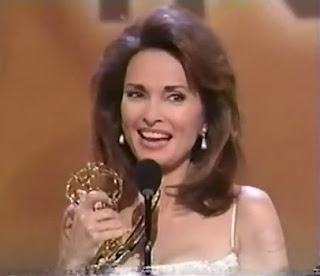 The Emmy Guessing Game™  is clearly important. Cookies are involved. Still it's not important enough to interrupt My Music Monday.

And let's face it, Mike has already calculated winners and losers, though he also needed Monday to double-check my results, as I did screw up once - for which he will not let me forget.

(update: he said he "trusted my work". Huzzah!)

Mike's choices are on top. Mine are below his. The winners / losers are fairly easily to figure out: - if his row is highlighted, he got the win, if mine is, then that's a win for me. If both lines are highlighted, we both got it. If neither are bolded, well, we both chose poorly.

Let's take a peek, shall we?

Let it be known that I did indeed give him credit for picking "Julie" Louis Dreyfus. So I'm not all bad.

But going by his guesses for the Limited stuff, he was picking American Horror Story almost in a straight (as IF!) ticket. I was picking Olive Kittridge in mine. I would have selected that and then won this thing by two. (and really - WHO bets against Frances Fucking McDormand?)

If you're a long time reader, you will know that usually we tie in these things. This is upsetting for many reasons:

A. potential of no cookies.
B. that Mike and I are not so different. And that one just cuts him to the core and keeps him up at night. As it should.

Once Mike saw his win whittle away, the bet of cookies started to dry up more than his over-baking skills. The prize went from home made, to store bought Pepperidge Farms, down to Nutter Butter knock-offs from Dollar Tree.

No one likes a sore loser, Mike.  No one.

Especially me. And especially when cookies (with no nuts!) are concerned.

One big package of the Dollar Store's Bargain Basket "cookies" on their way. They package was expired and "gently used" but I'm sure you will enjoy them. I bought a couple of extra packs to crumble up this winter and help me melt ice on the sidewalk.

It was an exciting competition -- and i congratulate you on your win. If the Emmy Academy would for ONCE not give a trophy to Frances McDormand, that would be awesome. Thanks in advance.