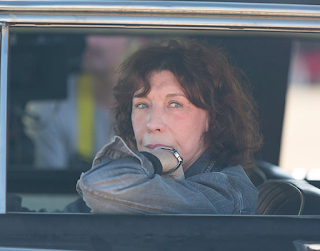 The idea was to go see Everest.

As you might remember from previous posts, I used to obsess over the mountain and the climbs that happen on it.

Our timing didn't work out for the start - so it was go in late (never!) or wait another two hours for another viewing.

We opted for another movie, but the only one out that we could agree on was Grandma. This is not to be confused with M. Night Shamalamadingdong's the Visit, which has been advertised (at least here) out the wahzoo.

No, Grandma is an indie film with Lily Tomlin as a lesbian grandmother helping out - well, her grandchild. That's as close of a Spoiler Alert as I'm giving you.

It should be noted, that once again, we were the youngest folks in the audience. We were probably the only people there who didn't have grandkids - though I think these grandparents were most likely taken aback by the subject matter and tone.

Start to finish, this is Tomlin's movie. She is in every scene - and the rest of the cast isn't shabby: Sam Elliott, Laverne Cox, Judy Greer (who even if paid minimum wage must be filthy rich, as she is seemingly in everything!), Marcia Gay Harden (whom I love - her work, that is) and Elizabeth Peña - who is always great - in what has to be her last, or one of her last, roles.

As for the woman who plays Tomlin's granddaughter, until well into the film, I couldn't have told you if she was supposed to be in high school, college or beyond. With her hair and make-up she could have been 16 or 36. Since she was almost in every scene, I would have expected her to be a stronger actress. She was ok........but nothing past that.

All that said - the movie could have been stronger. It had all the elements and yet it didn't fire on all cylinders, and that's a shame. Peña, I get is a character actor, but she was almost wasted. Ditto with Greer. I got more true emotion out of a doctor than I did out of any of the main characters - though I thought Elliott played his part well.

I'm glad that into her 70s that Tomlin is getting a top-billed role, but I was expecting a little more out of the role itself. I think she did admirably with which she had to work.

As it turns out, the film ended just as the next showing of Everest was starting. Had we had the 3D glasses (I think it was in 3D), I just might have snuck into the theater to see it.


Song by: John Mellencamp
Posted by Blobby at 12:07 AM

It's one of those films that looks good in previews--they're playing it like crazy around here--but makes me think that all the interesting bits are in the preview.

I guess I may see it; Someone loves any movie.