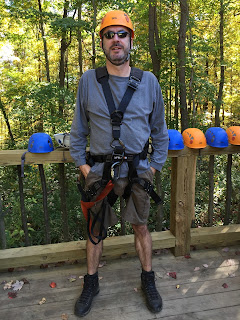 So this last weekend we went hiking.  I'm sure to show you more pictures another time.

But part of the weekend was dedicated to zip lining at a place called Soaring Cliffs.

Blobby is not much of a thrill-seeker. You won't get me jumping out of a plane or taking a plunge off a bridge while {hopefully} attached to a bungee cord.

710 used to jump out of planes avec parachute, of course. I never went to see him do this, but at the time he seemingly had fun. As years go by, he'll just shake his head talking about how stupid and careless that all was.

He told me a story this last weekend that I swear I had never heard. The radio was out in his helmet but the instructors talked him into jumping. He had no audible directions after his last foot left that plane.

It turns out he got caught in some kind of draft or vortex (or something). He would get down so far and the wind would just take him back up - and it kept happening over and over and over.  While he kind of took in a lot of scenery, after he got down, the ground crew was a bit worried and weren't sure he was actually ever going to be able to get down.

Now 710 just thinks how dangerous every jump was.

I feel the same way about bungee. I'm trusting that cord to stay attached to myself or the bridge, or as not to rip on my limbs in the process. And I still don't know if afterwards they just end up lowering you down, hoisting you back up, or just let you dangle there for eternity. The videos on the Travel Channel never show that part.

Anyhoo....zip lining didn't seem that bad to me.

You would think that in doing this, I'd have read up on it - the sport and the place we were going.

Thinking back, I was either lazy or just wanted to remain blissfully unaware of what was to come.

710 read. He told me there were 10 lines. But in my mind, I thought we would be doing one of those lines........and only once. And I thought that $75 was pretty steep for that short of a time, but maybe it was a really long line or something.

The one thing I did know was that it had a braking system and we wouldn't have to use our hands to help slow down - and you know, get that flesh eating bacteria where one then has to have all their arms and legs amputated later.

I did find out that Soaring Cliff has the longest (or was it highest) zip line in the United States. It's definitely a quarter of a mile long, and if Becky's dad counted correctly (and I know he did), it only take 30 seconds to do the run.

So while it takes about two hours to do all 10 lines - most of them taking less than 15 seconds to ride - and there were eight of us, there didn't seem to be a lot of time standing around waiting.

It was all very thrilling.

Only once was I cautious / afraid.

When they tell you that you must curl up into a ball as tight as possible so you don't hit the trees, well, then the worry starts. Everyone was to yell "cannonball" when leaving the platform. That didn't happen with me. I was thinking of doing a George of the Jungle and splatting right into a timber. I'm not sure I could have gotten into a tighter crunch.

After that, it was playing around. Trying to play cornhole (oh, clean it up!) from 60 feet in the air (I didn't even hit the wood, let alone the hole.......story of my life) or trying to do flips (nope, didn't happen) or zip upside down (kind of / sort of happened).

But at least two zips of mine were captured on "film".


I would totally go again. In a heartbeat.

One of my brothers-in-law, apparently, has been talking about it since we showed him the videos. He wants to go - so maybe in the Spring we will venture down and go again.

ew ew ew! scared of heights I am; you would NOT get me near THAT!

I'm with you about the bunjee jump and parachuting, but I've been zip-lining before and loved it, and have done para-sailing in Hawaii that was fun, too.
The sailing through the air I like ... it's the falling that gives me pause.

Sounds fun but no thanks. I like that you chose the orange hat. My yoga mat is bright orange.

Parachute jump? I never get on a plane that hasn't got a bar.
JP

I am enviable of your courage. I am too timorous to try this.

It's weird, but I always wondered why zip lines became all the rage. Then again, I grew up with one in my backyard, so maybe the charm just wore off. ;-)