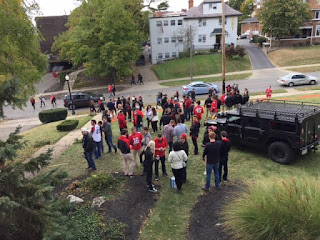 Greek life has changed. And it hasn't.

I know - right out of the blue, I start with that.

And I don't mean life in Greece, though with their economic turmoil, no doubt life has changed there too.

Normally, this last weekend's events would have been something I did for the blog's sake only. Just a subject to write about. But in reality, while I knew I would touch on it, I went for other reasons.

A few months ago, one of my fraternity brothers passed away. Chapter Eternal, if you will. Oh yes, that is a thing. One of the other members, a former roommate of mine, started a private Facebook group and organized what was to be a remembrance of Dave - but at a fraternity alumni event, and the Ohio State - Penn State football game.

I agreed to go.

I agreed for a few reasons. I love going back to Ohio State and Columbus. I really wanted to see a few of the guys from the house. But only a few. I knew I'd have to deal with the dickheads that I hated back then and still dislike now. I did the cost-benefit analysis in my head and weighed that the pros outweighed the dickheads.

Now, as it turns out, I probably ended up pledging SAE, one of the more racist and anti-semitic houses on campus, but of course, didn't know it at the time. That and being gay in a kind of not gay house always held me back with many people - of course, after the fact, it turns out a number of people in my house were homos besides me. But that all came much later in life that this was found out.

After agreeing to go and actually getting a hotel room (though Georty graciously offered me a room in their house, I knew my schedule would be sporadic and late, and that seemed rude of me to do that to them). I didn't go down on Friday, but Saturday morning, as what was supposed to be the main event was Saturday afternoon, before the game.

As it turns out, only a few folks showed to Saturday's event. Quadruple that number went to a bar the night before. That probably would have worked out better for me in some aspects, but that wasn't in the cards. And earlier in the week, two of the biggest draws to get me to come back out. Bastards.

Allegedly, my name came up a lot on Friday night. I never asked in what context, and it was never offered - but I can't imagine it was always in positive light.

Others who said they'd be there Saturday never showed, texting hours later, "where are you?" Really???

Saturday was a fraternity alumni thingy. A pig roast. The agreed meet-up time was 13:00 and I was kind of second-guessing going, but I was there, roaming around campus waiting to head up to the house. I love campus on game days. Not that it isn't always alive, but much more so the day of a big game.

As I traipsed up 15th Avenue - or Sorority / Fraternity Row, and arguably the one time main entrance to the University - a number of things leaped out at me. Many of the biggest, most popular houses (in my day!) were gone. 'For Lease' signs posted on them. Other, smaller houses, which could not have occupied the bigger structures on 15th now had moved there. Door after door had been shuttered. It was an odd sight to see.

Houses on Indianola were no different. Our house, looked the same - for better or worse.

I had not stepped foot in this house for 31-32 years. As I was getting closer, one of the folks I was to meet up with was across the street on his way. I hadn't seen Michael for that long either - and I was happy not to have to walk up the step alone.

It was great seeing Michael, who basically looked the same. His curls were gone and had some weight, but that's about it. His wife seemed nice, though very meek.

The current brothers at the house had something we never did - gumption. Most were all too eager to come shake our hands and know when we were there and how things were then.

When we had alumni functions, I would say we all went out of our way to avoid the returning brothers. I'm not sure how we weren't equipped for that, but we just weren't. Maybe social media and the internet age make things way way different in how people socialize.

Mike, Pat (who eventually showed) and myself talked about how different things were for them - and yes, I'm sounding like an old man. In our day, to invite anyone, you had phone banks, or had to copy letters, fold them, stamp them and mail them. Now it's a FB page, an email distribution list - it's all very very easy.

I joked that we were the old guys we use to try to avoid. Truth be told - I'd say about 3-4 older alumni showed, who were a few years older than us. And I met a few who graduated in 2012 - so I don't count them.

Mike, Pat and I roamed the house. The rooms haven't changed that much. Things were cleaner - though that's the other change. University Housing has taken ownership of all Greek houses - they maintain them, they clean them, etc. Which explains why the floors were never that clean when I lived there.

SAE's are a troubled bunch - nationally. Always getting kicked off of campus, no matter where they are. But that is true for so many nowadays. When our chapter got kicked off Ohio State's campus in the early 2000s (for the second time), the then brothers trashed the place, setting fires to all the old composites that hung on the walls. So much of the history vanished like ISIS in Syria.

One composite remained from my day. Michael and Pat had been gone a year, so I was on one. 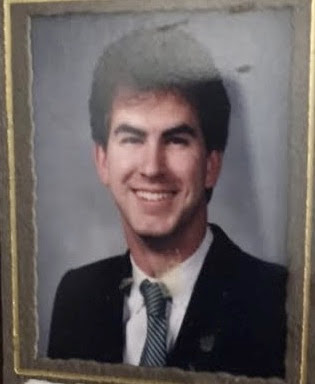 Oh - that was unfortunate that this didn't perish in the fire. I don't even remember owning a convertible. As I looked at the others in the picture, I maybe knew one-third of them. It was funnier to watch the current brother's reactions see someone from the oldest composite on the grounds.

While there was plenty of beer there, the guys were well behaved. Walking up 15th, other places had rap blaring. Which is fine, and I smiled the 731 times I heard the word 'fuck' coming from their PA systems. SAE's made me smile and comment, that of the music they chose, not one of the current members was alive when the songs were released.

One of the alumni, who came at the end of my stay in the house, yet I don't ever remember, was kind of a dick. And by 'kind of' I mean 'was a dick'. He is the one who parked his Hum Vee (so you know he's got a small dick) on the lawn. He carried an ammunition case to hold his cigars. He talked about how he married and divorced the same woman three times. By all accounts, he was a bigger dick the night before, so I'm glad I wasn't there.  Some men just can't grow up and live that life they did in college.

It was fun to bring up people's names and tell stories - some I hadn't heard that were disturbing, but it was about one of the dickheads to which I earlier referred.

I have to say, one of the current members seemingly took a shine to me. I thought it was my imagination until Pat said something to the same effect. I was invited to attend any Chapter Dinner (every Monday!). Just to stop by. And when I ran into him later in the street after leaving the house, he was equally attentive. And very cute.

Pat just laughed at me. I laughed at me and the situation. Where was he when I was 19?  I mean, besides 20 years away from being born.

So we got one shot in front of the house and then headed to Varsity Club for beer. 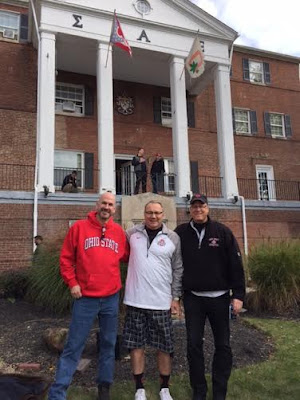 I got chastised by that dickhead I mentioned earlier (though via FB - though I'm not friends with him there...or anywhere). He said, seems like I didn't get the message about it the game being a Black Out (wearing all black). I go to one game every few years - fuck if I was plunking down $60+ for a sweatshirt for one game.

BTW, we did raise a glass to Dave. He was a nice enough sort.

Sunday, I met another brother / friend for breakfast. He couldn't make it Saturday, and he was one of the few I really wanted to see. I got to apologize to him for introducing him to his first wife - which did NOT end well. He laughed at me for that. He never once blamed me for that introduction.

He asked a lot about 710. He liked the fact we were married.

So the cost-benefit analysis still came up on the positive side. It was worth the trip - and we won the game, so, there is that too.

I am not really one for trips to the past, reunions and such. I have a handful of friends from college days that i keep in contact with, but the rest, well, I'm not that interested or invested.
I tend to be a let the past stay past kinda guy, except for family and those few close friends, whom I consider family.

Sorry for the passing of your 'brother', but glad there were some fun/enjoyable aspects to the trip.

Got to love the SAE house. They never learn. http://www.nydailynews.com/news/national/fraternity-pledge-asks-co-ed-topless-pic-rush-week-article-1.2404601

Oh the pain. I have never been to that place, nor do I intend to go. I would probably be torn to pieces!