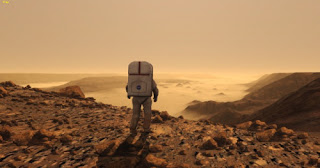 We had tickets to the opening night of the Martian on Friday.

It seems I'm the only person in the world - or the little part of which I participate - to not have read the book.

I kept telling myself that was ok, for the after-movie discussion I could bring a different perspective to it all. As it turns out - it just left me out of the conversation regarding what was cut out and what was changed. I should have seen that coming.

Let's say it was on par with Gravity and still leaps and bounds better than Interstellar (though what wouldn't be better than that movie?), though none of the movies are alike outside of space, logistics and survival. Though they are important themes here.

There won't be too many spoilers here, but I think it's ok to say the movie's premise is an astronaut is left for dead on Mars, when he is indeed alive and the subsequent scenario(s) of how can they get him back.

The cast is  - how do I say this - standard and yet eclectic for this type of movie. Matt Damon as the stranded guy seems standard. Jessica Chastain as a fellow crew member seems plausible. Jeff Daniels as head of NASA seems right for the part (though he eems to be nothing more than the serious variation of his character on the Newsrooom). . Chiwetel Ejiofor as a project lead? yeah.  And of course the funny Hispanic side-kick is played by Michael Peña. All well done.

More unexpected are Kristen Wiig as a NASA spokesperson, Donald Glover (Community) as a JPL guy. Both seem fine, though a little out of place. For a spokesperson, Wiig's character has a lot of questions of things you think she would know - but that is more for audience backfill of information - still it makes her look a little weak.  And there is Sean Bean as lead of the flight crew.

I'm big enough of a geek to laugh at a Lord of the Rings reference as they're all sitting around a table that includes Bean.

And for some reason, I really liked a woman who worked at the Johnson Space Center. I causally mentioned it after the movie, and our friend James immediately agreed. Never seen her before - and while I wouldn't say the role was a throwaway, but it wasn't that vital either. Little things like that can make a difference.

The movie is long - maybe 2.5 hours. After the rescue mission actually begins, the movie pics up the pace. That is not to say the preceding parts aren't important or are slow.  And like Everest last week, there were a few scenes heavy with foreshadowing.

I would say the movie is well done, including most of the science (I mean it is science "fiction"), the human factor etc. For a while I assumed the video diaries that Damon's character was doing it for NASA communication. In reality, it was that being a sole person on a planet, what / or how much monologue would be going on if not for that action. And while all other aspects of the movie include character interaction - Damon is mostly on his own - so that part is vital.  (think Bullock in Gravity.)

There are a number of scenes that made the audience laugh, and you need the tension release, but sometimes I thought they were too often for such a story.

I might have an item or two of questions on 'how....', but they're minor (no one at JPL uses Apple??? REALLY????) . And at least they made Damon's teeth look icky at the end of his year or so alone in space. Apparently not only can no one hear you scream there - but you can't floss or brush regularly.

We would have liked to have seen it in 3-D, but one of the theater-goers can't see movies in that format. I never did get the 4-1-1 on that.

MetaCritic and Rottentomatoes are creaming themselves over this movie in terms of ratings. It's good. Even very good. It wasn't so out of this world {get it? get it???} that I would go with excellent.

I think the Martian is a definite go-see, though now it seems silly to go back and read the book.

Song by: Joni Mitchell
Posted by Blobby at 12:03 AM

Two of my nieces went to see it yesterday. They enjoyed it. I think I'll pass on it, just not my cup o tea.

We had plans to see it today, but with all this rain and flooding here around Smallville, we may wait a couple of days.

Other than the fact that 3-D sucks, other reasons people avoid them are a tendency for headaches, nausea, vertigo, and potential for eye infections (especially if immunocompromised).