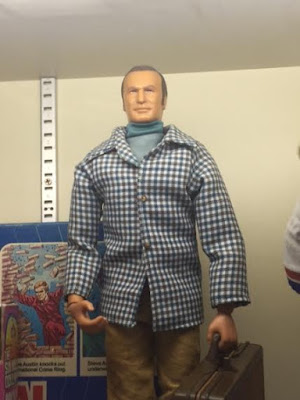 One of the funniest parts of the 40 Year Old Virgin was when Paul Rudd's character (or was it Seth Rogen's) pointed to an action figure and said to Steve Carrell - "is that Steve Austin's boss?".

Honestly, it made the movie for me. Maybe because I was a HUGE Lee Majors / Six Million Dollar Man fan.

Before having dinner with Becky and 710, she and I were looking through Big Fun and lo and behold, there he was - Oscar Goldman: Steve Austin's boss. And in his '70s government sport coat.

Becky asked who played him and all I could remember was Richard.....something or other. A quick text to Morty and he shot back the answer, "Richard Anderson, why?".

I'm assuming the question was just tongue-in-cheek.
Posted by Blobby at 12:01 AM