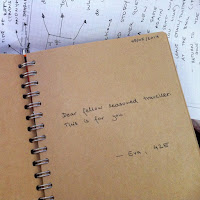 Someone asked me the other day if I missed traveling for work. It's not a black and white answer. I do miss it - on some levels. I like going to new cities and seeing what little I could when I wasn't actually working. I don't miss the process......meaning mostly the airports.  I normally didn't mind the planes, maybe because a good portion of the time I was upgraded to first class.

But even in the short time I've stopped business travel, the industry sounds like it's taken a nose dive faster than Malaysian flight 370.......allegedly.

TSA is worse than ever, making even the pre-check lines a nightmare. So, that part, I don't miss at all.

I've told you stories of my travels.....mostly the bad or odd. Maybe there is no good....just "less bad". But you could argue that they're interesting. At least in the hands of the right person.

So this woman, Eva Liparova, "wrote" a book about stories from the sky.  Or co-wrote, as she says.

Wrote is in quotes, because, while probably her idea (I gotta leave myself an out), fellow passengers crafted the tales......while they are in-flight.

She collected them. And published them.....in blog form, but now also in a book (again, someone else went from blog to book.....just not me!).

Strangers on a Plane.

It was random, and yet it's not. Ms. Liparova has instructions: read the last story.  answer the question posed in the last story. write your own question. sign with row and seat number. pass the book on to the next passenger.

I think the idea is brilliant. At least as one not traveling.

If you read through - and I think you should - most of the writings are short and concise. I probably would have gone on a while. I would have over thought my question. I also would have read more than the previous entry. But I'm guessing many people did that.

Interestingly enough, my hubby and I were having this discussion the other day.....having spent the better part of 12 years with about 85% of my time on the road, the past year has been a fantastic grounding and revelation in the ability to spend time at home: breakfast / walking the fur-kids / time to day-dream / dinner with friends / etc etc etc.

That being said, I'm ready to hit the road again. Maybe not at quite the same level of travel, but enough to build up the FFY miles again for fabulous trips around the globe...in business class, of course!

I must selfishly admit I do miss the premium level FFY....imagine standing in line with the masses and no entry to the lounges. ;)

While I don't travel for my actual business, I travel for my investments and family. Both are on the east coast. The rental units are all in Florida and family in Virginia so I spend many days flying coast to coast. I clicked over and find her idea interesting. I'm not sure if I would have participated. I would like to think I would have but often I'm in the middle of a movie so I likely would have blown it off. I, like you, rarely talk to anyone especially since I am usually on the aisle and am the one they say excuse me to. I don't like being cornered by a Chatty Cathy and therefore refuse to be one.
I do have to say that Business/First, TSA precheck and United club lounges make it all much more pleasant. It's worth the expense.