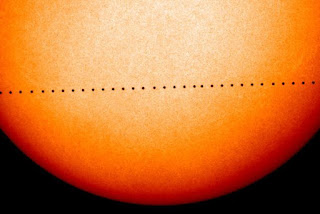 It was far too overcats (not a typo....well, not at least not accidental) to see Mercury pass in front of the sun yesterday.

I mean, not that I could have been out of my office for seven and one-half hours to watch it do so, even if it was clear.

And I didn't have any pinhole in cardboard trickery to see it - and being the lazy ass I am, I'd have just stare directly at it all until I became like Mary Ingalls.

During my first quarter of college, I took Astronomy 101. I was enthralled. I absolutely loved it. The irony was not lost on me that I was taking Math 104 at the same time. Deep down, I knew my math skills would never be up to par for that of some into that type of science. But it was fun to hear that Tycho Brahe possibly died of an infection because of a burst bladder - as was the custom, one could not get up from the table until the host did.

Maybe astronomy wouldn't have been my calling, if after 30 years later, that is my only take away from the class. I'm sure I learned other things, but that is always the first one that comes to mind.

Sill, I love shit like the Mercury / Sun / Earth thing.

One (meaning: me) would think: Mercury passes in front of the sun every single day. I mean, they're both right there! So close, one could borrow a cup of sugar from the other. Mercury is the Mrs. Kravitz of the solar system.

But no, allegedly this is not the case.

I mean, I think it is the case, the difference is that the Earth isn't in line where it can view this.

"For a transit to occur, the sun, Mercury, and Earth all have to line up directly. But Mercury's orbit is inclined by about 7 degrees compared with Earth's. So there are only two spots where the two planets could conceivably line up with the sun — the places where Mercury crosses the Earth's orbital plane.

"Earth lines up with these intersection spots around May 8 and November 10 each year, give or take a few days. If Mercury, which takes 88 days to orbit the sun, is also wandering through at the same time, a transit occurs. This happens once every seven or eight years."

And that is reason #1,392 why Blobby isn't an astronomer.

Song by: Counting Crows
Posted by Blobby at 12:08 AM

It's always of great interest to me to find that a fellow blogger also has a keen interest in Astronomy.
When I was 9 or 10 our school teacher suggested we all write 'books' on a subject of our choosing, and I was at a loss to think of something. When he went round the class asking for subjects picked he expressed surprise that no one had mentioned Astronomy. That kick-started my interest and very soon it became an over-riding passion, and has remained a high value subject for me ever since.
My first ever ambition was to become an Astronomer and, though that never worked out, I've never stopped reading all I can about the subject and follow any and all TV progs about it.

It's no coincidence that my favourite film of all time remains '2001 - A Space Odyssey', and whatever one thinks of the philosophical aspects it brings up, one can't deny that for scientific accuracy, getting on for half a century later now, it hasn't been surpassed - thanks almost entirely to that 'God' of mine, Arthur C.Clarke.

As for Mercury's transit, yes, although it was cloudy here (and I didn't have the means to view it anyway) I did lap up all on the info about the event on TV. Seeing tiny Mercury, broiling away while circling that gaseous super-giant is another of those things that reveal how petty we Earthlings are with all our silly quarrels, when we can see what a minuscule speck we ourselves inhabit in the ultimate Universal (or, in this case, Solar System) scale.

So when and if you ever do another blog on the subject you know that there will be at least one avid reader of what you write - and, maybe, some more fellow bloggers will 'come out'. I do hope so.

Math and astronomy both in one post, my brain hurts.

I was always the little enthralled with all things spacey (not Kevin) when I was a kid. Living so close to Cape Canaveral as a kid, I'd watch every launch I could. Which then fueled my love of science fiction. I still geek out on space stuffs too. If you don't have it--and we know how you are about actually buying apps--you should check out Star Walk 2.