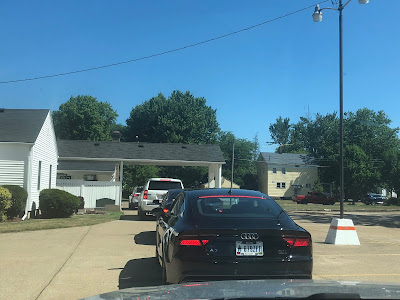 As you know, I'm a big reader of the daily obituaries. Though, that said, our local paper has redone the format and I'm not a fan.
So much so, that I kind of breeze through most of them now. Maybe I don't care for change that much after all.
Anyhoooo......if you read them, especially over the last few months, there has been a shift in them.....obvi.
Like anything else these days, how one has - or doesn't have - a funeral has changed.
The obits will always say "a celebration will be had at a later date to be announced".  BTW - the longer this virus carries on, the chance of that "later date" is zero. But we've gone from no funerals at all, to small ones with masks and social distancing required to 'drive thru' funerals.
Now, I've read this and assumed things - and not necessarily incorrectly, but had not really given it tons of thought. Until last week.
My cousin's wife passed away - expectedly unexpected.  I got a text from his daughter, who is closer in age to me than he is, telling me of his wife's passing. She mentioned the drive-thru funeral, which started this part of the chain (I'm in blue): 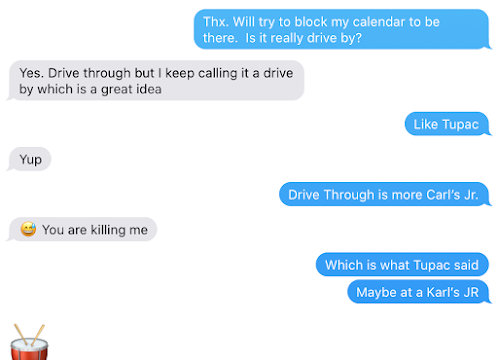 Let it not be said that I am ever appropriate. Good thing Louise is usually on the same page as I.
So yesterday was the day. I drove the 90 minutes to basically go through a drive through. And no drink or sammich to go with it.
Not knowing how this would work, or the volume of cars, I got there shortly after the start. Only four cars ahead of me.....as you can see.
As you pull in, a man takes the info you would have put into a guest book, then you get in queue. I happened to notice the two cars behind me were two other cousins. As we were just waiting (if the line got too long, I'm assuming the funeral folks would have urged things along), I got out of my car, and they theirs, and we stood 20' away from each other - with masks - and caught up briefly. I hadn't seen either one of these guys since my mother's service / celebration a year ago.
Actually, now that I think of it, the last FIVE times I've seen them has been at funerals. And Dan I saw a sixth time, at the World Series a few years back.
But then I pulled up under the portico, and my cousin, his kids and their spouses were there - with masks - and we got to chat for a few moments, express condolences and a promise of getting together when this is all over - or outside at a large table.
Oh, and the casket was outside too, but not out with the family, but close to the actual building. Unless you truly looked, you wouldn't even see it.
Louise and I - beforehand - mentioned how weird it all was, but clearly nothing was mentioned at the time. It was almost odd how not so odd it actually was. Not that I'd want to do this often, but that's true of any funeral.
Welcome to the new normal.
Song by: Nick Lowe
Posted by Blobby at 12:07 AM

This is the first I have heard of drive-by funerals but I guess you have to make do with the current circumstances. I really enjoyed the text exchange. Made me chuckle and it is a good way to end the evening. I think I found my way here from anne marie in philly. Glad I did. Take care.

Obviously, you are a family guy. I consider that a compliment. I find it gladdening to know they still exist!

I'm not much for any sort of funeral; I find them quite morbid and gross. when I go, no service, cremation, chuck my ashes in the ocean.

I haven't been to one yet but my first thought would be, "Is the car clean enough? Is the car wash open?"