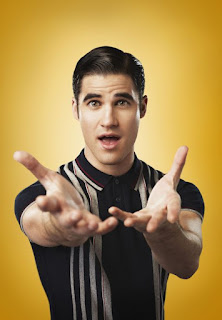 Hey, Darren Criss..............tick tick tick....
First Finn. Then Puck. Then Lea Michele's career. Now Santana.
The grim reaper is picking every single Glee cast member off one-by-one. And not so discriminately.
I'd say the other cast members need not worry, since it would take Death a while to even locate them, as they're probably no longer registered with SAG, but it's not like the other four were actively doing much of anything except heroin, child porn and shitting on other cast members (and only semi-literally).
I mean, if I were Ryan Murphy, I'd be scripting a new American Horror Story where the cast of an ensemble were getting picked off, and while they knew it was a risk, it was worth it for a fleeting shot at fame.
Of course, we shouldn't put it past Mr. Murphy to have dreamed this up years ago, and it's the only reason he brought Glee to life in the first place.
Should he actually be off'ing those folks, you gotta figure Gwyenth Paltrow is somewhere on that list.  ....so......finger's crossed!
Song by: Seal
Posted by Blobby at 12:07 AM

(But that's what keeps me coming back!)

I hadn't thought about this - because I couldn't stand Glee. But where is Jessica Fletcher when you need her?

Dark. I love it! I think the same way about the Kennedy Center Honors.