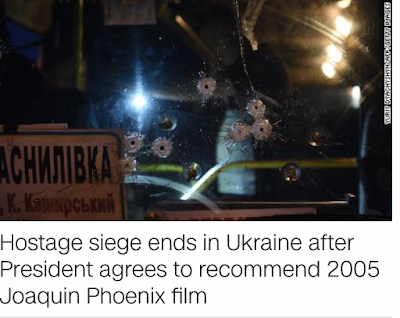 Honestly, if these are the options, should I be the hostage, it just might be easier, and more humane, to let the kidnappers kill me.
My lord, I just thought of something: say that kind of scenario happened in this country.  What would the least likely movie BLOTUS would have to recommend to release - say, Roger Stone, Paul Manafort, Michael Flynn or say, I dunno, Ghislaine Maxwell ?
I'll say, he should fight to the death to recommend the Interview with James Franco, our national treasure!
Now your turn......in the comments.
Song by: Jules Shear
Posted by Blobby at 12:07 AM

Not quite sure if this is in the spirit of what you were expecting, but if I were to be tortured by being forced to watch one film on a loop for evermore I can't think of a worse one for me than that perennial favourite still of so many millions, and one I absolutely LOATHE on many levels - yes, none other than 'GREASE' - yuk! [I will allow, however, that some of the songs are pretty good].
Number two would be 'E.T.' - only seen once way back when it was first released, but that alone was one time too many.

I agree with Raybeard about Grease. I saw it when it first came out. Loved the music but those actors couldn't pass for teenagers if their lives depended on it. I thought- what are these guys, forty?
If I was going to have to torture somebody with a movie, it would have to be, let me think now, Napoleon Dynamite!

Well RB, I know you read me so you'll also know that arguably of the two biggest movies of the 20th century I haven't seen: ET and Grease. Full disclosure: I've seen Grease 2 dozens of times. It's so horrible you can't look away.

E.T. Is exceptional and a Steven Spielberg Masterpiece!

B. All I can say is 'Lucky you' for NOT having seen those two execrable films.
Your life must be so much richer than mine. What you say about G.2 [not seen by me] is precisely how I feel about the original, having watched it at least half a dozen times AND got it on video which I haven't yet destroyed. I was waiting for my next getting sloshed out of my mind to watch it yet again before crushing it to shreds, But since I've now been teetotal for about four years it's having a reprieve.

JDW, re E.T. - many more people will agree with you than with me. I'm quite aware that for a significant number of people it's their all-time favourite film. All I can say is on my single encounter with it, with all that slushy sentimentality I had great difficulty in holding my vomit down.

Abd btw, you can add 'Top Gun' to my 'Hateful Three'.
Better stop now otherwise you'll get more than just 'Eight' but my entire Top [or Bottom] Fifty.