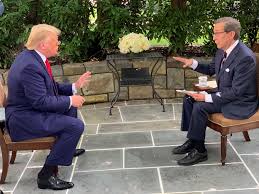 So BLOTUS told Faux reporter Chris Wallace {please don't confuse him as the liberal end of Fox, he's still a dick} a number of bat shit crazy stuff this last Sunday.  The cognitive test conversation was fucking hilarious.
Wallace attempted to get BLOTUS  to “give a direct answer” on whether he would accept the Nov. 3 election results or not.  The response?  “I have to see. Look, you — I have to see. No, I’m not going to just say ‘yes.’ I’m not going to say no and I didn’t last time either,”
I expected nothing less.
But "journalists" being what they are these days did not do the obvious follow-up.
Follow-ups, actually.  Plural.
Since the Obese president didn't quite answer and since Wallace didn't quite say, "if the results said you lost....." (though that was the inference) the seemingly obvious first follow up should have been:
"So, if the electorate says you won, you're saying you might not accept those results?"
Since the man is an egomaniac, naturally he would have said 'yes, he'd accept those results".
The second follow-up, would / should have been, "so with the same election, same parameters, same everything, why would you be so good with one set of results and not the other?".
Then we'd get to watch the fat fuck flounder (I do love alliteration).
But none of that happened........except in my mind.  Missed opportunities.
Song by: Daryl Hall + John Oates
Posted by Blobby at 12:07 AM

it's a wonder that chair didn't snap under his fat ass. and did you see his makeup job? oy gevalt! 3 colors!

I just noticed something - no masks, no social distancing. WTF?

Pfft! Fat fuck frequently flounders! I don't see how anyone around the doddering dolt could refrain from grabbing the nearest chair and bashing it across his face, out of sheer frustration. I couldn't watch. Never can. Clips from late night talk show hosts work for me.

It is a well-known fact that Illuminati consist of Multi Millionaires,
Billionaires who have major influence regarding most global affairs,
including the planning of a New World Order. Many world leaders,
Presidents, Prime Ministers, royalty and senior executives of major Fortune
500 companies are members of Illuminati. join a secret cabal of mysterious
forces and become rich with boundless measures of wealth in your company or
any given business, the great Illuminati can make everything possible just
contact : brightiluminati666@gmail.com
.com or WhatsApp +593960127139.
Thaddeus I am Vice-President of Citizen Outreach THE ILLUMINATI
ORGANIZATIONDo not hesitate to contact us by WhatsApp.: +593960127139
Email : brightiluminati666@gmail.comBEWARE OF SCAMMERS, THERE IS NO SUCH THING AS REGISTRATION FEE AND YOU MUST
BE ABOVE THE AGE OF 18YRS.
THANKS