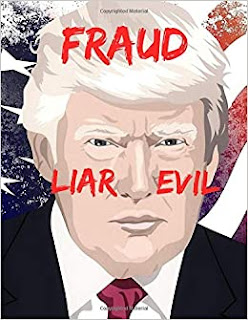 I've been reticent to write about politics. I go through periods where I stay away, and it makes me less anxious.
Yet, BLOTUS and history needs to be documented - and I'm like the 2020 Encyclopaedia Brittanica.*
This whole paid bounty on U.S. troops and that motherfucker actually saying he wasn't briefed? So, on the off off off off off chance that this was true {cough cough cough}, what does that say about his Secretary of State, his National Security Agency, the CIA and Department of Defense?
So, BLOTUS should fire every single head of those areas, no?
I'd say 'the buck stops here', but BLOTUS does not subscribe to that thought. His is more, "everyone else is to blame but me".
Occam's razor is: he's lying.
Shock.
So, I believe it is 22 dead soldiers?  Is that correct?
Let's see, if my Math 104 class taught be anything (both times!) 22 soldiers - 4 in Benghazi = 18.
So yes, 18 more dead than on Hillary Clinton's SoS watch. I have yet to hear one republican (or democrat actually........though I stopped reading stories on this days ago) call for one, let alone 33, hearings on this matter.
Curious.   Not unexpected.  Just curious.
The other funny - yes, funny - is BLOTUS' "white power" video. No, that part wasn't funny. Not unexpected. The "story" that no one could get ahold of the fucking president of the united states (yes, lower case was a choice!) for THREE hours because he was playing golf to take down said video is HILARIOUS.
First off, that man hasn't been off his phone for three hours in a row for his entire presidency. Secondly - you. knew. where. he. was.  He travels with a team, any of which you could get ahold. So this time Occam's razor isn't quite as clear, but it comes down to two options:
1. It took them three hours to get him to take down the video.
2. No one was actually looking for him or trying to contact him.
I'm going with a hybrid of the two.
FYI: 123 days till the election.
*no fact checking performed. Just like GOP press and sound bytes.
Song by: Dwight Yoakam
Posted by Blobby at 12:07 AM

Excellent and smart! I’m glad to see someone can put in words what I have thought about for 3.6 years . Someone has stolen part of my life, and for that alone the guillotine is too gentle! CHOP!

now the schmuck is saying the media are making up this story "to make him look bad". MUTHAFUCKA!

INVITATION FROM THE ILLUMINATI ORGANISATION 666

This is an open invitation to everyone that is interested in becoming part of the world's biggest conglomerate and reach the peak of your career. As we begin this year's recruitment program and our annual feast of harvest is almost at hand, so we decide to introduce you to the "New World Order".

At this point, we're assuring anyone who is ready and faithful to become a member of this great organization, that once he/she becomes a full member of the Illuminati brotherhood then will automatically become rich, powerful and be famous in life and achieve all their heart desires and also receive a monthly salary of $500,000 USD. We are ready to change your life, we can make your dreams come true.

The great Illuminati district offers you a life time opportunity of making your heart desires come true. I believe everyone on this planet "Earth" knows about the ILLUMINATI, but for those that don't know much about this Organization, I'll brief you about it. The Illuminati is a secret society that bless man kind and fulfill his/her dreams of becoming a millionaire, billionaire and also promote their various business. At this moment, I believe you've know more about this organization and there's no reason to be afraid of anything.

I'm not here to mess with you or play games with you because as it stands now there are lot's of people out there who Impersonate us, claiming to be members of the ILLUMINATI. So the Brotherhood then comes to conclusion of Globalizing this organization in order to help those who are really ready to become part of this Great Family and those that were misleads by Impostors. Now i believe this is your opportunity to join our prestigious Organization and make yourself and your family proud.


If you're interested in joining this Great Organization, then contact our Grand Lodge at Pennslyvania, USA via
WhatsApp: +1 315 203 9948 or our official Email: illuminati666grandlodge@gmail.com

I suspect the red states with their high rate of covid will not blame the POTUS ; he is gambling and will win people will blame the mayors and governors rather.