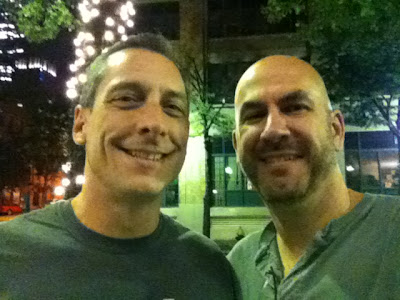 Ok, it's not so secret, but I haven't yakked a lot about vacation. But it has begun.

Landed in Boston yesterday and on our way to Maine later today. More on the logistic and doings of our day in Boston in another post. It will be a little out of order, but you'll cope.

I can give you a little update on a blogger meet up. I got to have two drinks with a blogger buddy - BosGuy.

So far I've had a 100% success rate on meeting up with quality blogroll folks. I haven't met a dud among them yet - though it's only up to six now. (I don't count meeting JMG in a bar for all of 45 seconds, nor do I count Rebecca whom I've known since the g-d particle came to be.)

BosGuy (I know his real first name, but I don't know the protocol for using it here) and I met for two drinks. That seems to be the norm. I had two drinks (oh, and lunch) with Stevie B. Two with Tornwordo. Two drinks to Birdie. Two with John. And two with Spo (oh, and dinner).

Bos seemingly knows everyone in Boston. We tried one place but it had no air on. It was 90 out, we weren't sitting inside with a crowd and no a/c. But he greeted or was greeted by at least a half dozen folks, one who assumed they knew me since I was with him. "HEY - how are you?" the stranger said to me. I don't know why, but it amused me so.

So off it was to Fritz, where I had drinks with John last year.

First off, I was a total ass. I brought no cash, not that I expected Bos to pay for a thing. "We only take cash on weekends", I was told. Really?? Someone's skimming something under the table. I never carry cash. I mean, I had $4 on me, but really?  BosGuy fronted my two drinks. He's a prince. A prince with cash, apparently.

I'll buy the next rounds. Honest.

My BosGuy meeting was somewhat different than other blogroll meet and greets. We did talk about NONE of you. None. We barely touched on blogging at all. I think the most was when some of his very nice friends sat down next to him and were ribbing him about that he should blog about some podunk down called Messina, NY. I don't think it's happening. (oh that guy from there is gonna read this and get maaaaad.)

They then found out he knew me via blogging. Michael (the only name I remember, sorry), asked what my blog was about. Before I had a chance to answer, Bos goes, "it's about him". I chimed in saying people can deny it all they want but all blogs are about the person writing them. Even if doing a political blog, chance are you're skewing the stories to your leanings, hence it's about you.

We talked about family, partners, apartments and houses. We talked about Boston, Provincetown and Ogunquit and Coco Peru.. And most will hate this, but we talked baseball. Well you won't hate it, but you won't understand it, but baseball is the sport which the sex analogy of "bases" is derived. I know that is most of your frame of reference, so you can wiki it later. Or listen to a Meatloaf song. Eh, some of you will get that reference.

Of course, I "forced" taking a picture with him. I took my glasses off and couldn't see. I was happy to stop at the first pic because Bos said he was fine with it because he looked good. I'm glad we took another one. While I look iffy and it is grainy, the first pic really did not do him justice at all, so I didn't use it. I'll send it to him to use if he posts about this event.

I had a very nice time with Bos, as I suspected I would. I like his blog - and he blogs way more than I do, albeit shorter posts - and if you haven't checked it out, I suggest you do. But a big thanks to his hospitality and friendship.

Ok - off to wake you know who so I can buy him breakfast  Me so hungee.

Song by:  the National
Posted by Blobby at 6:48 AM

His blog is one of my favorites and I love Boston - went to grad school there. 2 of the best years of my life.

Is Bos pronounced like the last word in the Tony Danza/Judith Light vehicle or like the speakers?

Have fun on your vacation.

It was nice to meet you in person too. I look forward to continuing our conversation both online and off should you return again.

You flatter me with references about how many people know me but I appreciate it and wish you and the hubby a great time in ME.

It was "wicked friggin hot" today so I hope you were able to visit the beach and cool off.

PS - Thank you Sean what a sweet comment to make.

What's crazy is that I've met you, but I've never met BosGuy in person. Clearly, I'm a suburbanite. :-)