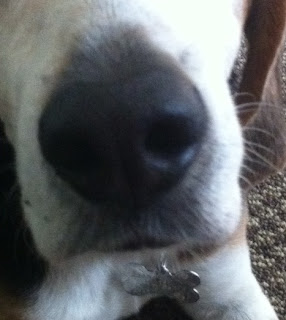 You can all stand down now - we're keeping him.

We decided last Saturday. I'm just getting around to telling you. It took me a few days to even tell my sister.

While we always loved him as uncles, it is different being a dad. Even a step one. But right now, I'm feeling less and less a stepdad and more of a real one towards him. Maybe that is me picking up dog pooh talking, but he fits in.

I'm not sure we know if he's happy or not, but he's content. I have to believe he misses the kids, the big yard and his learned ability to open their sliding glass doors and screen doors and go out and in whenever he damn well pleases.

But, he only had access to the kitchen inside. With us, he wanders the downstairs like a pro and loves flopping down in the middle the room and just passes out. 10 year old beagles sleep a LOT.  His three walks per day and the 90+ heat are probably not helping that fatigue. I guess we'll see when / if the weather breaks.

So the process has begun. I went on-line and got his license. He has a new, albeit temporary, ID for his collar with our phone number and address. The Invisible Fence folks were out to provide an estimate (no judgments please, he's been on it before and fine and he loathes being on that run that is stretched between the house and trees). We're fitting him with a new collar that won't let him pull as much, but he's a hound and we have deer, bunnies and yes, say it, squirrels. He tugs. That's what he does. We'll both adapt.

I don't anticipate the walks to lessen, except when I travel. It's good for him and it socializes us too. We end up talking to neighbors even more than we have - and that's a good thing. It's hard to stand and talk when "someone" is on a squirrel (c'mon - say like Veruca Salt!) or bunny scent.

And Petey has been so much better on the leash.

Then there is Sophie. Is she thrilled? No.  Is she coming around? Yes.

They are now in the same room at the same time and there is very little hissing. Last night Sophie was was next to 710 on their chair and Petey climbed up and slept on the ottoman. 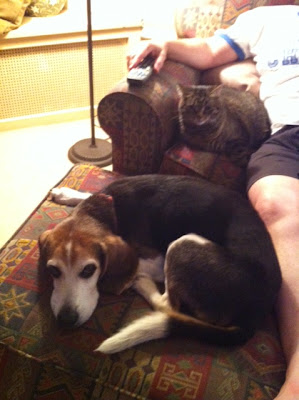 ...and earlier in my office, they were only 3' apart. Granted Sophie was 3' above him, giving her potential striking advantage (it never came to that). 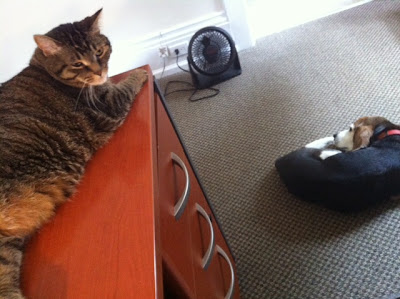 I think they will eventually become good buddies and for whatever reason, Petey hasn't found the cat food bowl, so all is right with the world.

For all the concern from 710 of me being my father with animals (i.e. permissive), it's turning out he has a softer heart for Petey than I do. It is quite endearing to watch. Like all the other animals we've had, they'll like him better - they always do.

I'm really not jealous by this, it is great to watch and it expands our family.

You can expect a few pictures of Petey I'm sure - if nothing else at 12 of 12.  Sophie's going to have to share her screen time.

This is really great news. He's so cute!

YAYZ; petey has a forever home! and sophie will always assert herself as queen of HER house; I'm sure petey will adjust.

Looking forward to many pictures of this new family member!

I want to snuggle up beside 710, Petey and Sophie. Move over Blobbie

The new Georgie! Congratulations! Mine are just a bit older.

Aww... congratulations to the three of you! Or four as it now stands!

And I'm glad you have a new family member!

I am relieved for him and happy for you all.
I hope in time you all grow in love and happiness.

Happy to hear this! And even 5 year old beagles sleep a lot. Georgie hates the heat but loves the snow. Maybe Petey is the same.

I'm soooo glad to learn that Petey is adapting so well. That is so precious him on the ottoman showing no fear of pussy. Good for him and good for you!