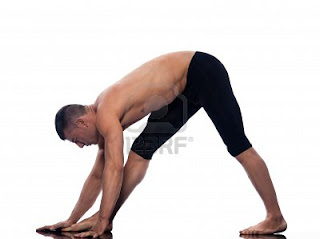 All things considered, I'm really enjoying yoga again. Those other things are that this class works me harder than that beginner class. The one I never felt I deserved to move out of.

Maybe I don't deserve the move, but I've done it and I haven't really crumpled yet. Oh sure, there have been times when my quads have quivered so much that I am sure I'd not only lose the pose, but go face first into my mat.

While we've only been to the class twice together, it only took once for us to achieve a reputation. Perfect. The high school lunch room should have been like this. Maybe it was.

I was greeted by a couple on the way in who talked non-stop about David, and why not?  He's fun and funny. He's done this class more with them too, so they don't know me - I got no street crud cred.  Not that Woodmere Village has "street cred".  They have an Original Pancake House, but no street cred.

Of course, what I found most amusing was a woman I had not noticed my other classes. She made a beeline for where David and I placed our mats and asked if she could be next to us. Then asked if we'd be doing any commentary like last week.

Now, I'll be honest, I didn't really think anyone but the woman next to us heard our banter, but my mother says I have been 'blessed with a voice that carried'.  And yes, I did make that one loud comment about 'being in hell', still........

The joke was on her. Save maybe two comments, we were pretty quiet for the hour. Sure, there was a time when the yogini was readjusting and rubbing the smelly stuff from last week on the hot Aryan Kurt from Sound of Music in front of me, and I might have said aloud, "I'll do that for you!!!!"

Before the class started, someone gave announcements on running club, other classes including - wait for it - belly dancing!!!!

The woman who wanted to be next to David and myself immediately turned and asked us, "are you going to do that??"  We both agreed to it.  David probably more in jest. Me, more for a blog entry.  Though in reality, I doubt either one of us will do it. I suppose I could do it and he could just video it. I can use if for brettcajun's next Jiggy Dance Whore-Off competition.  That is, if he ever does another one.

But besides the class itself, the hour after class has been great. David and I walk over to Barnes & Noble, grab an iced tea and sit outside and yak for the next 60 minutes. It's just casual chit-chat, but it makes my week.

It is unfortunate that I have to miss next week's class, but I'll be back for the following one - then on to belly dancing.

god I love a dutch oven!

I think I be showing more belly than actually dancing.

you should do it

good for you!
I feel guility for not doing my yoga.